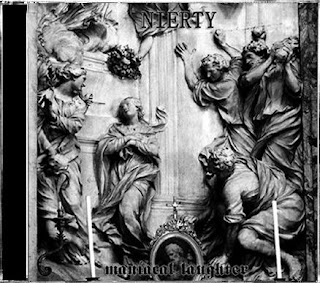 Nierty are a band from the U.K that has had a few of their previous releases reviewed by this zine that plays an industrial tinged form of blackened death/grind and this is a review of their self titled 2007 ep "Maniacal Laughter".

Drums range from slow, mid paced to fast drumming with a great amount of blast beats being thrown into the music, while the intro is a very dark avant garde noise effect in addition there is a brief use of a synth being utilized on one song that gives the music a dark ambient/experimental feeling, as for the bass playing it has a very dark tone with riffs that follow the riffing that is coming out of the guitars.

Rhythm guitars range from slow, mid paced to fast death/grind riffs that are heavily influenced by death metal and with this recording they used more melodic riffing here then they would in the future while the lead guitars when they are utilized on this recording are very chaotic sounding blackened death metal guitar solos and leads.

Vocals are a mixture of deep death metal growls and high pitched black metal screams,,while the lyrics cover hateful, destructive and misanthropic themes, as for the production it has a very dark, raw and primitive sound to it.

In my opinion this is another great release from Nierty that is more black metal influenced than their later material and if you are a fan of blackened death/grind, you should check out this ep. RECOMMENDED TRACKS INCLUDE "Deformed Empire" "Wrath Of Damnation" and "Postmortem Epidemic". RECOMMENDED BUY.

Posted by OccultBlackMetal at 4:28 PM