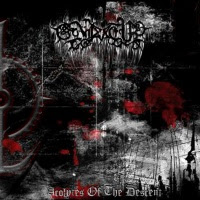 Nierty are a band from the U.K that has had some of their previous material reviewed in this zine with a musical style that I would describe as being blackened death/grind with industrial overtones and this is a review of their 2010 album "Acolytes Of The Desent" which was released by Misantrof ANTI Records.

Drums range from slow, mid paced to fast drumming with a great amount of blast beats being thrown into the music in addition there is some use of a synth that brings a very symphonic sound to the music, while the sound effects bring in a very dark avant garde noise sound to the music, as for the bass playing it has a very dark tone with riffs that follow the riffing that is coming out of the guitars and at times they have a very powerful sound to them.

Rhythm guitars range from slow, mid paced to fast death/grind riffs that utilize a great amount of black metal and some industrial influences with a brief use of clean playing, while the lead guitars are very chaotic sounding black/death metal guitar solos that utilize some melodies.

Vocals are a mixture of deep death metal growls, high pitched black metal screams and some spoken word parts, while the lyrics cover hateful, destructive and misanthropic themes, as for the production it has a very strong, powerful, heavy and professional sound to it where you can hear all of the musical instruments that are present on this recording.

In my opinion this is another great release from Nierty and if you are a fan of atmospgeric blackened death/grind, you should check out this album. RECOMMENDED TRACKS INCLUDE "Catechism Of Death" "Born Burning" "Fields Of Extinction" and "Ashes To The Grinding Stone". RECOMMENDED BUY.

Posted by OccultBlackMetal at 5:24 PM