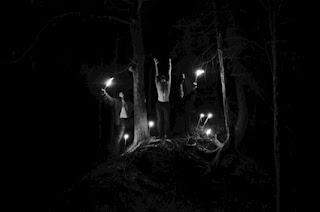 The musical foundation for what was to become Arkhaaik, as well as the conceptual underpinnings, were created by M. and myself in late 2015 or early 2016. We initially worked on material as a two-piece, but considering that my drumming abilities are limited to put it mildly, V. joined the fold and his earth shattering barbarity behind the kit has proved to be essential to our sound. As for the project, Arkhaaik is the excavation of rites long forgotten, of primitive worship and ancient deities that ruled long before man dominated and soiled the earth. These sounds explore Europe's bronze age and encompass the very essence of said rites that were extinct long ago, told in the Indo-European tongue that was used at the time and is now long lost to the ages, its utterance strange to the modern ear.

2.You have your first album coming out in July, can you tell us a little bit more about the musical style you went for on the recording?

I'd prefer if people actually listen to the music rather than read me describe what the music sounds like. Suffice to say, our intention is to unleash primal barbarity.

3.Your lyrics cover  the  long  forgotten rite,  primitive  rites  and  ancient  deities  of bronze age era Europe, can you tell us a little bit more about your interest in this topic and also do you feel that history for the most part ignores this era since it is not something you normally come across?

In fact, I think that many musical projects, particularly from the Helvetic Underground Committee, demonstrate an interest in history in general and have created conceptually based releases resulting in a more complete artistic creation as a result. Our interest in this topic seems rather self evident, as it is a time that is rarely explored in a musical context, at least not the the extent of attempting to recreate ancient visions of pre-historic horror.

4.What is the meaning and inspiration behind the name 'Arkahaik'?

It's spelled "Arkhaaik". The name is meant to be harsh on the ears and harsh on the eyes, a fictionalization of the word "archaic", resulting in a starker immediate pronunciation and reading of the word.

The artwork was created by R., friend of ours from Zürich, Switzerland. Interestingly, it was not commissioned for this release. Rather, M. discovered it while being showed a few of R.'s more recent creations and (quite accurately) found it would perfectly fit as a visual representation of the music contained on our album. We were initially unsure as to how to approach creation of the artwork for this release, so it was a rare blessing that this creation fell into our hands, more or less, and R. was generous enough to allow its use.

6.Has the band done any live shows or is this strictly a studio project?

No live shows and none are planned. We have many other commitments in other projects which make regular live activity in multiple projects rather difficult.

7.I have noticed that there is very little information available abut the band online with no metal archives page or facebook, do you feel it is very important for the style of metal that you play remains underground?

I don't think its important at all to conceal or reveal additional information. We have come to the realization that for our purposes, it is most efficient to allow information to be spread from a centralized source, for us the social media presence of the Helvetic Underground Committee, curated by the ever competent Nysrock, as well as our blog site. For certain other H.U.C. affiliated entities, like Ungfell and Dakhma a segregated, additional individual presence has been deemed fruitful, so it comes down to personal preference. Regarding metal-archives, once the album is out I'm sure someone will make an entry for Arkhaaik, as pretty much every band that plays what the site moderators consider "metal" music is listed there. That's out of our control and not of particular interest to us.

8.The new album is going to be released on 'Iron Bonehead Productions' which also has a few other bands from the Helvetic Underground Committee, do you feel this label has done a very good job getting yours and your counterparts music out there heard?

We are definitely satisfied with the work IBP has done for Dakhma and DVT, which is why I reached out to Patrick to gauge his interest in releasing the Arkhaaik debut. Certainly, the collaboration has been fruitful and has resulted in high quality releases we are satisfied with.

I actually have no idea, as I haven't been sent any reviews or anything. I have heard direct feedback from some individuals who enjoyed our music.

We have recorded a new song for a special release that I will not divulge any further information on at this point. We intend to forge further in developing our craft and exploring the depths of pre-historic man and spirituality, as well as providing punishing, barbaric riff savagery that will pound the listener with a rage long forgotten by modern society.

I listen to all kinds of music, recently I've been taking a break from my steady diet of ancient black/death necromancy and checking out some obscure rock acts from the 1970s that M. has shown me. I thoroughly enjoy country music from the late 60s and 70s as well. As for influence, I prefer that listeners go into our music uninhibited by any preconceived notions of what it "should" sound like.

Thanks for your questions. 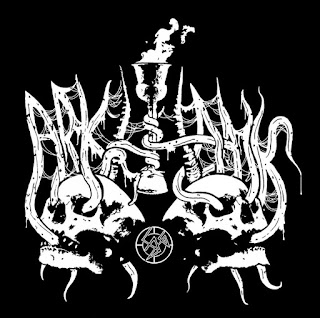 Bandcamp
Posted by OccultBlackMetal at 5:08 PM