It has taken a bit to get the record out basically because the vinyl pressing plant in charge is extremely busy nowadays, and the wait can be endless, especially if the Record Store Day is in the middle of that. Love it or not, vinyl is "cool", and the demand surpasses pressing plants capacity. Anyway, we have not been idle, already working on new stuff and playing gigs around, as any active band is supposed to do.

I believe we have generally improved a lot. The songs are more structured, there's a lot going in each one of them, the contribution of the new line-up with Sledgehammer and Blackstuff has been very important in that. We enjoy ourselves playing the songs, so I hope it's the same listening to them. The same goes with the sound, it's more honed and the recording definitely does justice to it.

3.A lot of your music is very heavily rooted in the 80's style, do you feel that metal was a lot more pure in those days with most of the extreme genres being closely related to each other?

Certainly metal has divided in billions sub-scenes throughout the years, often not even communicating between each other. Some of the newer styles we like, some not. It's not a matter of purity, to each his own. We have a "back to basics" approach because that's where our metal roots lie, that's just what we like because we've grown up with that. It's something very natural.

As I said before, the songs are way more structured now compared with our old stuff, more varied. We are able to combine many different inputs shaping a personal sound. Yes, we are not inventing anything, but I believe we have a definite personality, which is the aim any band should pursue. A proof that we succeeded in that, lies in the reviews you can read throughout the web: we've been compared to anything between Helloween to Death, that means that's only apparently easy to label our own sound, it's not just some retro-metal. Lyric-wise the evolution is similar. In spite of the recurring anti-metaphysical themes, there's a lot more pouring in into the lyrics coming from various kind of readings. There's a lot of references behind the apparently usual images and metaphors. "Birth and death of Rish'ah", for instance, is based on a short story inspired by a series of painting by Zdzislaw Beksinski.

5.What is the meaning and inspiration behind the name 'Barbarian'?

Barbarians were the people coming from beyond civilization, unable to speak what was considered to be the common language. Basically outcasts refusing the commonly accepted moral and social standards. The defiance of these kind of standards often surfaces in our lyrics.

The cover has been painted by Shagrat from Acid Witch/Shitfucker, just as our previous two albums. It's strongly connected to the title "To No God Shall I Kneel", the Barbarian is sitting on a throne holding the heads of three women representing the theological virtues: faith, hope and charity.

Each show we play has a great importance to us, we have a very in-your-face approach, very basic as well, maybe kinda punk. It's like thundering our energy directly towards the audience, it gets very pshysical, and people attending our shows seem to like it. Touring the U.S. in 2017 has been definitely a great experience. Playing abroad is always great because we can get in touch with a lot of new people.

Besides the album release party, we are trying to work out some tour for 2020 to promote it in the best way.

8.The last few albums have been released on 'Hells Headbangers', how would you compare working with them to your old label 'Doomentia'?

Doomentia is (or was apparently) a great label, they believed in us from the very start just based on a demo, like in the old times. That's been brave, and we will always be grate to Lukas and Doomentia. Hells Headbangers is a bigger label, they are covering more ground worldwide, both promoting and selling the album, and we are so proud to share the roster with amazing bands like Midnight, Acid Witch, Bat, Nunslaughter, Nekrofilth and Deathhammer.

9.On a worldwide level how has the reaction been to your music by fans of black, thrash and speed metal?

After 10 years people got to know us more. I think that people who listen to our music with due attention, will notice that we are trying not to be the average old school band, I strongly believe that our personality is showing more and more, and the feedbacks to the latest album are being great. It looks like it has an appeal for fans of both traditional and extreme metal, that proves a lot, because METAL is METAL

Hip hop? Reggae? New Wave? I guess not, the new stuff is even more structured, a total riff and tempo galore, but still 100% Regressive Metal (or no metal at all!)

We listen to a lot of different stuff, not necessarily metal, all of us love music, it's like the justification for being alive. I guess that gives us something more, because we have a wider outlook when composing. Of course the outcome is always metal, but, I dare repeat it, a personal form of metal. I could fill pages namedropping bands. I'd say the new album has a more epic feeling to it, and the melodic leads probably come from some classic heavy metal, but hey, there's so much going on in there.

Good luck with your zine, we are glad you enjoyed our album and gave us this opportunity for an interview, cheers! 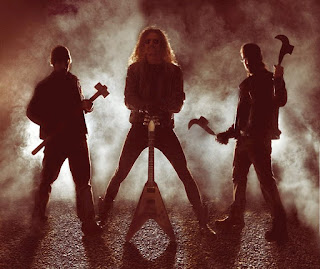