Burial In The Woods Interview 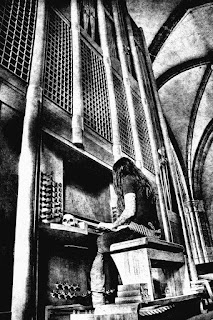 1. For those that have never heard of you before, can you tell us a little bit about the musical project?
Hi and thank you for the interview. Burial In The Woods was born sometime back in 2009. I already made a mix of Black and Doom paired with some DSBM influences with my previous band Negatum. However, I was no longer interested in doing suicidal/depressive BM after the split-up. So I grabbed the chance when starting this new project and took up one of my favourite topics: horror literature. In keeping up with the lyrical concept I wanted to create music that was as dark, spooky and heavy as possible. Did I reach my goal with the debut “Church of Dagon”? Probably not ... (Unfortunately) I tend to drift too much into a melodious songwriting. On the other hand, I have developed a style that characterises the sound of BITW.

2. At the end of June you also have your first full length coming out, can you tell us a little bit more about the musical style you went for on the recording?
“Church of Dagon” combines many different styles. I would describe the music simply as Black/Doom Metal. But there are also influences from Funeral Doom, Ritual Ambient and even sacral music. What I’ve experimented a lot with is mixing several scales, especially occidental and oriental ones. Not only from part to part within a song, but also simultaneously with different instrument groups. Thus, the rhythm guitars, for example, play an occidental scale while the lead guitars play an oriental one in certain parts at the same time. I don’t know if this is particularly innovative but I haven’t heard anything like that on other recordings before. There is something that was also very important to me for this album: real choirs. To be able to perform that, I took a few singing lessons. And it was worth it, because otherwise I would never have been able to sing up to four different voices recorded with up to 14 single tracks. That was a hell of a lot of work. Furthermore, the pipe organ takes over a very important role on “Church of Dagon”. Where the organ sounds are used – more or less – as a supplement in the songs “Growing Shadows”, “Forbidden Pages” and “Gölgeler Alemi”, it is the main instrument in “Ecclesia Dagoni”. This is the last song I wrote for this album in 2018, as well.

3. You recorded an unreleased demo around 2009/10 and put the project on ice until 2017, can you tell us a little bit more about it?
For the demo I recorded the two songs “Growing Shadows” and “Forbidden Pages”, which can also be found on “Church of Dagon”, only in a more primitive and less well-arranged form than on the album. In order to create an atmosphere that is authentic as possible, I went to play a real pipe organ in a local church. This worked out pretty well, so far. Later, at home, I noticed that the organ was out of tune and didn’t match the guitars. First, I tried to compensate this problem using various pitching effects. Since I wasn’t able to fix it even with special software, I was so frustrated that I’ve put the whole project on ice in 2010. I simply didn’t want to accept that I’ve made the complex recordings in the church in vain. There have been several attempts to revive the project, but there was always a lack of motivation to re-record everything. However, I was able to raise the necessary motivation spontaneously at the end of 2017. Only in a few weeks, I re-arranged the existing songs “Growing Shadows” and “Forbidden Pages” as well as “Gölgeler Alemi” (originally written and released by Negatum in 2008), wrote the song “Ecclesia Dagoni” and finally recorded “Church of Dagon”. The difference: this time I used a software organ (Spitfire Audio Union Chapel Organ), which simplified many things – and sounds even more authentic then the real instrument.

4. A lot of your lyrics are inspired by the writings of H.P. Lovecraft, can you tell us a little bit more about your interest in this author and are their any other writes that have had an influence on your music?
In fact, all lyrics on “Church of Dagon” are inspired by H. P. Lovecraft, except “Gölgeler Alemi”. In short: “Forbidden Pages” is about the Necronomicon, “Ecclesia Dagoni” is about the Esoteric Order of Dagon and “Growing Shadows” is about the city of Innsmouth. I’ve read many horror stories – from Hanns Heinz Ewers to E.T.A. Hoffmann to Bram Stoker and even to Stephen King –, but the atmosphere Lovecraft creates has never been topped by anyone for me. Of course, certain stories by E. A. Poe can hold a candle to those of Lovecraft when it comes down to intensity and horror, but Poe didn’t create such a well thought-out multiverse. I’m really obsessed with these dark atmospheres. Interestingly, I’m only interested in horror books, whereas the most horror films bore me. Even for my other solo project Asche der Welten I’ve used quotes from the horror authors Lovecraft, Poe and (Ambrose) Bierce in the booklet.

5. What are some of the other lyrical topics and subjects you have explored so far with your music?
Except Lovecraft respectively horror? Well, not so many yet. I’m planning to write more lyrics about the Lovecraftian universe for the next songs. However, this time I’ll work a bit more on lyrical concepts within a release. The only thing that has not been mentioned so far is that “Gölgeler Alemi” (Turkish for “Realm of Shades”) is about death in an abstract and mystical way. When I translated this text into English for the digipack print, it seemed very banal to me – but this isn’t the case in Turkish at all. Although this is a cover song, I can’t exclude that I’ll write lyrics in the future which will have no reference to Lovecraft.

6. What is the meaning and inspiration behind the name “Burial In The Woods”?
I didn’t decide on the band name until 2018 when finally a name had to be found to release an album – the project didn’t have one before. For me, the name refers both: to the music (genre) as well as to the ritualistic and occult atmosphere. Moreover, I wanted a name that couldn’t be associated with Lovecraft directly if I ever decided to change the lyrical concept. I know that “Burial In The Woods” can be seen as very clichéd and/or common, but I don’t care. I think the name goes perfectly with the music.

7. Can you tell us a little bit more about the artwork that is presented on the album cover?
The cover photo shows the Basilica Cistern in Istanbul, Turkey. It was completed in the current form by the Byzantines in the 6th century A.D. and is located just a few hundred meters from Hagia Sophia, one of the largest churches ever build. The ground is covered with water and the 336 columns, each 8 meters high, are illuminated from below with red light. So, the building has a very dark and eerie atmosphere and, thus, this is one of my favourite places in Istanbul. For a long time I have been toying with the idea of using a picture of the Basilica Cistern for a cover artwork. And for “Church of Dagon”, I couldn’t think of a more fitting picture: the building looks like an ancient church and the ground is covered with water, which can be understood as a relation to the Great Old One “Dagon” and the amphibious human beings of the Esoteric Order of Dagon. Also the fact that the cistern is located in today’s Turkey and the album contains a song with Turkish lyrics fits very well.

8. With this project you record everything by yourself, are you open to working with other musicians or do you prefer to work solo?
After the failed attempt to record a demo, I tried to continue the project with the help of other musicians, twice. In the first place, I was looking for a drummer to be able to fully concentrate on the guitars and maybe to strive for a complete line-up at some point later, as well. Unfortunately, it didn’t worked out somehow. That was around 2012 or 2013. Basically, I’m open to collaborate with other artists, even if this is currently only possible for me in the form of studio/session musicians. For the next release, I already asked a friend of mine if he would like to contribute something on the acoustic guitar. What I can rule out is a live line-up because on the one hand I don’t know how the songs can be performed live without an armada of musicians (in certain parts, up to four different guitar melodies can be heard) and on the other hand I don’t have any ambition to play live with BITW.

9. On a worldwide level how has the reaction been to your music by fans of black and doom metal?
Since only the song “Growing Shadows” has been published when doing this interview, there was hardly any feedback. However, the feedback I’ve received yet has been largely positive. Among other things, my music was described as innovative, conceptually coherent and very intense in sound. On the other hand, I’ve been told that Lovecraft has already been used by so many others and my songwriting is difficult to access. I can overlook the first and I’m even happy about the second because I don’t intend to make commercial music accessible to non-Black/Doom/Funeral listeners.

10. Where do you see yourself heading into as a musician in the future?
That’s a difficult question. In the first place, I want to stay true to my principles. Furthermore, I would like to progress as a musician and as a producer, too. By this I mean above all that I want to be able to realise my musical ideas and visions in sound better – and definitely not to become commercially successful.

11. What are some of the bands or musical styles that have had an influence on your music and also what are you listening to nowadays?
Before I started the project, I listened a lot to the albums “Einblick in den Qualenfall” (Verdunkeln), “Rain upon the Impure” (The Ruins of Beverast) and “Levitating the Carnal” (Elysian Blaze). I’m not sure if I’d call that a direct influence, but certain things I found very impressive – like the use of choirs. Interestingly, I never really liked Funeral Doom (without any Black Metal elements), even though it is more common to use a pipe organ there. The three most-rotating albums of the last weeks were Mayhem’s “De Mysteriis Dom Sathanas”, Vemod’s “Venter på stormene” and “The Door of Doom” from Candlemass. I listen to albums, which I like very much, a dozen times in a row. In general, I tend to listen to albums as a whole – and not to single tracks.

12. Does Occultism play any role in your music?
Yes, as a stylistic element to create a dark, spooky and ritualistic atmosphere. To be honest, I am not interested in occultism apart from horror stories, films or art in general. If somebody just seriously hints at spiritual things: that’s driving me crazy absolutely. I see myself as an absolutely rational and down-to-earth person. In terms of aesthetics, however, occultism is very appealing to me.

13. Before we wrap up this interview, do you have any final words or thoughts?
Thank you very much for your interest in Burial In The Woods!

If you are interested in listening my music, visit the Burial In The Woods Bandcamp site: https://burialinthewoods.bandcamp.com/

The digipack can be (pre-)order for just 8 € at the label site: https://shop.naturmacht.com/

Posted by OccultBlackMetal at 4:11 PM