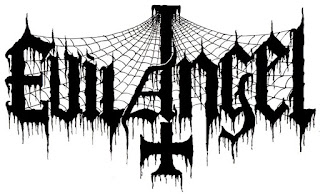 
Well, the record was recorded already quite some time ago, we had a lot of troubles with the mixing and mastering process and the person who originally was supposed to do it didn´t make it happen so we had to find someone with good understanding of this kind of music. Our drummer Revenant ended up doing the mix and then we used an outside source for mastering. luckily it ended up sounding really good in our opinion.


Since the recording we have rehearsed regularly  and also played our 20 year anniversary gig in Steelchaos festival here in Finland, and ofc slowly but steadily working on new material.


I wouldn´t say it differs musically that much. Many of the tracks have existed already several years  and the oldest ones are almost as old as the ones found in the debut album. I think there won´t be big changes musically in the future either, we will stick with the foundation that makes Evil Angel Evil Angel.


3.This is also your first release since 2008 can you tell us a little bit more about what was going on during that time frame?


We had some line up changes, we parted with our original Drummer Diehard, and our vocalist Orgasmatron left for a few years also and during that time we played a few and select live gigs with different drummers and vocal duties were handled by Liisa from Pyrotoxic.


Von Bastard has his own thing going with Sacrilegious Impalement, in which also Tooloud and Revenant from Evil Angel are part of. They also were part of Urn for a while.


Von Bastard and Revenant play also in Front  and me + Orgasmatron had a band called Witchtiger  where Sadoharri ( Pagan Rites etc, etc, ) was the primus motor. So we all have had other musical endeavours in the meanwhile to keep us busy.


4.All of the other band members are also involved with other bands, what is it that you bring into the music of 'Evil Angel' that you are not able to do with your other groups/


Evil Angel was the first band for most of us, so maybe it is another way around. The music from our other bands are not really that close to Evil Angel´s music and I would say that even though we do not like to limit ourselves too much musically there is not that much room for experimentation's in this kind of music. So if one needs a different outlet, naturally the best way is to have another band for that purpose.


5.A lot of your lyrics have covered satanic, occult and blasphemous themes, can you tell us a little bit more about your interest in the dark arts?


I think often the interest in heavy and dark music and the occult go hand in hand and I don´t make any exception. I have never been the one to practice any rituals at least in the sense most people think of such things, nor I have followed any religious dogmas. It has been the hatred for the existing society built upon the various abrahamic religions for the most part that drives me forward to be the adversary.


6.What are some of the other lyrical topics and subjects you have explored over the years with your music?


Well if you look at the song titles we have, they are for the most part pretty much self explanatory, but surely there are also some personal demons of the lyricist Orgasmatron, heh!


The cover is drawn by our long time friend J.S. who also plays bass for the black metal band Kyy. I very much like the result. Simple and effective and to the point. In the backside of the cover you can see a pic of two radio masts which are one of the most defining landmarks of our hometown Lahti.


8.What are some of the best shows that the band has played over the years and also how would you describe your stage performance?


The live show is always energetic, full on attack! For me , the most memorable has been of course the recent 20 year anniversary gig, in which we re-united also for part of the gig with our original drummer Diehard! Also supporting Nunslaughter and Sabbat ( JPN ) come to mind.


9.Do you have any touring or show plans for the new album?


Plans for sure but nothing concrete yet. Well an actual tour maybe hard to do but a few select gigs would be very welcome.


10.On a worldwide level how has the reaction been to your newer music by fans of black and thrash metal?


The album has been out only for a very short while, but what I gather the reactions have been mostly very positive. I don´t think there is much this kind of music released these days, let alone with good quality so I think there is interest.


11.What is going on with some of the other bands or musical projects these days that the band members are a part of?


Knowing Von Bastard there is always something happening, but I cannot say much about that at this point. But I am sure when something happens it will be worth to check out.


12.Where do you see the band heading into musically during the future?


As said earlier, we do not feel that we want to make any big changes, of course we always try to make things even better. But bestial old school way it shall be!


13.What are some of the bands or musical styles that have had an influence on your newer music and also what are you listening to nowadays?


For sure bands like Sarcofago, Slayer, Beherit , Blasphemy, Sodom , old Sepultura ,Venom, Motörhead and the likes to name a few have been the ones who's influence can be heard also.


I used to only listen to metal but nowadays I enjoy many variety of music besides metal. 70s prog rock, surf music, 80´s pop, movie scores by Vangelis, Carpenter and Morricone etc.


Thank you for the interview, be sure to check out ”Unholy Evil Metal” , our on Hells Headbangers records on LP and CD formats. For booking gigs etc. contact evilangel_metal@hotmail.com 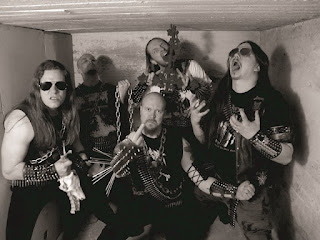 Posted by OccultBlackMetal at 5:47 PM