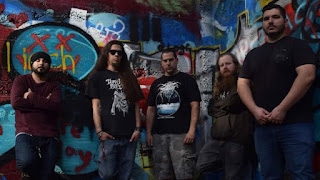 We are constantly writing. We pre-recorded several tracks ourselves and reworked material before we actually ended up recording the album. "Release My Suffering" was originally 10 tracks and we ended up keeping 7 to complete this album and chose to keep the other 3 for reworking on a later release.

2.In January you have a new album coming out, musically how does it differ from the stuff you have released in the past?

Well, we had some members come in and out of the band before we recorded this recent album; it has definitely effected the sound in a very positive way. This album, we found our sound on and in the future we will further it, it differs from the past because all of the members roles are very apparent and fulfilled.

3.From 2011 to 2017 there was no music being released, can you tell us a little bit more about what has been going on during that time frame?

During 2011 though 2017 a lot of material was being generated. We had a ton of live shows, where we were kind of perfecting the craft if you will. That's what we see ourselves as, live musicians. We played many great shows in different venues and any old dive we could book. We have taken big steps forward in achieving our sound this time around.

Man's arrogance towards each other and our surroundings, self-resentment, depression, and suicide are some of the REAL topics we write about, but there is a small element of fantasy in there to keep our own imaginations going. As far as progress, I think a phrase by the late Chuck from Death went, "you can do Horror and Gore but life is way more BRUTAL and everybody has to live it, everyone does it!" Something about writing about real shit people go through has more substance.

5.What is the meaning and inspiration behind the name 'GoreSkinCoffin'?

There is no hidden meaning behind the name GoreSkinCoffin, the inspiration actually comes from a former NFL player "Frank Gore" and a song from Australian band Psycroptic "Skin Coffin".

We commissioned 3 original pieces from artist Chadwick St. John. He asked for a mood or feeling and we essentially gave him the album title. 2020 and 2021 were brutal years for the band as people, (it was for everyone) with death, isolation, and misery. Chadwick took this and turned it into the conceptual story of the Stone Angel. A Stone Angel comes alive in an ancient cemetery located at the edge of a cliff in the future, it walks out towards a tree whose limbs extend out towards the moon into despair, then it is lifted into the clouds by a burst of light. The album art depicts the main concept, while the back and cover will display the rest.

We have played many times in our greater area at different venues. Some of the more memorable acts we played with were bands like Pathology, or our good friends in Embryonic Devourment. We are a live band for sure and we thrive on an audience. Even if you are not a metal head, I have had folks come up to me after shows and say "I'm not into metal, but tonight this was my shit!" So we know we are doing something right!

8.The new album is going to be released on 'Funeral Goat Records', can you tell us a little bit more about this label?

Funeral Goat is primary representation for previous and current members of GoreSkinCoffin. If the right label came along we would be interested, but right now we are content just being.

We are very welcomed by genres like Grind and Death metal. Black metal as anyone knows is an elite art form, though our roots started in the genre and still have veins of it, we have tried to further ourselves and widen our pallet as a band.

Right where we are is where we want to be. We learned a lot this time around and will be quick to apply it the next time we are in a studio setting. I think there is talk of a music video in the making too.

Black and Death metal-classic and modern and Grind. I think we are even going to cover like a G-6!? Who knows! We all over the place, talks of a cover go on FOREVER. Our main roots are very well connected, bands like, Cattle Decapitation, Archspire, Opeth, Emperor, Alcest, old Cryptopsy and Suffocation. We really enjoy music from so many different genres, rather than just metal, and it's good to have some variety.

We appreciate the opportunity and support, and wanted to bring up mental health awareness to the metal community. Everyone has horrible days, and the world has been especially isolating and dark in recent times. Metal and the folks involved are a special community that supports each other. There is a network there if the family support isn't!

Posted by OccultBlackMetal at 7:56 PM