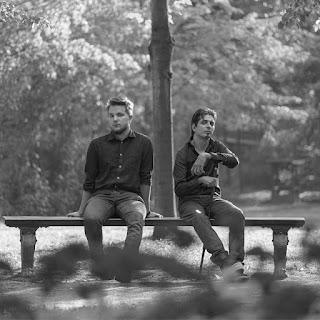 Hey Guys, first of all, thanks for the opportunity to give you this little interview! TAUSENDSTERN is a german based blackened death metal project, founded by Moritz (all instruments, add. vocals) and Phil (Vocals, all lyrics, concepts) back in January 2019.

2.Recently you have released an album, can you tell us a little bit more about the musical style that yo went for on the recording?

For us, it's mainly pure blackened death metal that works with undertones of progressive, atmospheric and doom metal.

So, we don't try to reinvent the wheel but we still try to put our own notes in the genre.

3.Both of the band members are also involved with other bands or musical projects, what is it that you bring into the music of 'Tausendstern' that you are not able to do with your other groups?

Moritz and his main solo project (he has a few more) is mainly progressive / experimental black metal with very complex song structures and very diverse arrangements. He is a part of TS because he wanted to write something that is way more straight ahead and compromiseless than his own music.

I am the founder of the dark metal band Akoasma (Moritz is also a part of it). We are quite emotional and theatrical with influences like pop, classic, clean vocals and all that stuff. Black or Death Metal are just glimpses in our music. So I just needed something that puts the focus on the harsh sides of metal music.

Well, "Hamartia" freely translated means "deadly fault". The word has it's roots in the greek language and is a part of the greek heroic saga. I wrote a concept that reflects us, the human race as this deadly fault. "Hamartia" is a Laudatio on the downfall of man. The lyrical frame for "Hamartia" was inspired by Mel Gibson's "The Passion of Christ". In general it is also important to say that the lyrics are heavy metaphoric. So, the listener still has the opportunity to interpret his own thoughts on "Hamartia".

5.What is the meaning and inspiration behind the name 'Tausendstern'?

The name "TAUSENDSTERN" is a metaphor for the star called Wormwood, that falls down to earth when the judgement day has come. It is something that is clarifying on a very radical and eternal way. We liked it.

The cover art is originally drawn by Fernand Lematte. He was a french drawer who lived from 1850 till 1929. The picture we used for our cover is a copperplate called "Judith". It is a great reflection of need in situations of pure sorrow. The woman on the picture tries to find a sense in her sorrow and loss. That's quite poetic.

I think in our core we'll remain as a duo. We just like the work flow in this constellation. We can make fast decisions. Further we are totally free on our way in making music. But there are plans to bring TS on stage with a session line up next year.

I think the debut has landed very well in the underground scene so far. To be honest, the most of our fans are well known with Moritz solo projects, so this community was a great bonus and platform for us to present the debut. But we also have listeners in other countries. Germany, USA, Russia, Holland, France... quite nice I think. But an undeniable fact is that we are a little niche band making music in an well filled genre. So... Success is a relative thing.

Moritz actually works on his next Nurez release. I heard the new stuff already and it is awesome. He has also some plans for his other solo projects.

With Akoasma we're working on the 2nd album right now which planned to be released in 2022. It's a concept album. Different singers, classical instruments, choirs...heavy work.

TAUSENDSTERN are currently talking about / working on a new album concept. We've also three unreleased songs which will be released as an EP in 2022 hopefully. Actually this project is waiting for it's finalization. But we are very proud about it yet.

We are influenced by bands like 1914, Panzerfaust, Behemoth, Belphegor and Helrunar.

Thank you so much for the opportunity to give you the interview. Thanks to all the people who gave "Hamartia" a chance, thanks to the ladies and gents from The Order Ov Black Arts, to our promotion mate Davide Pulito. Thanks to all the great people around us and to those who'll maybe cross our way in the future!

https://bit.ly/3c2MJ5h
Posted by OccultBlackMetal at 5:12 PM