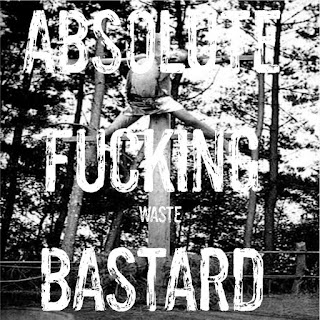 1.  AFB started out as me simply wanting to make something that was not only heavy but also very abrassive. as a one man project ive got complete control over what that means which i like. My music taste is varied but typically i tend to like chaotic, dissonate heavy music. Seeing bands like Full Of Hell change their sound from album to album while still being heavy inspired me to try to up the "heavy" factor while not being a copy of a million other "heavy" bands.

2.So far you have released a full length and also have been a part of a split, musically how do they both differ from each other?

2. I think both offer something different and special. I feel like putting out a split you have to try to match the other bands songs, in every way. no one wants to be the bad part of a split so it pushes you to make your best stuff. whereas your own album it lends itself to being creative. you have control. you can do what you want which is also nice.

3. i tend to be a nihilist and with this project even more so. i want the lyrics to match the music, i want the gravity of both to just crush people. Basically i want someone to hear the words and be like "ive been there on my worst day" and relate to that.

4.What is the meaning and inspiration behind the name 'Absolute Fucking Bastard'?

4. The name of the band comes from something someone once said in passing about someone. In talking about how vile that person was they called them "an absolute fucking bastard" which stuck with me. It was true but also when i hear it now it brings up a picture, or an idea of someone. and given how dark the project is, i wanted the listener to get that feeling as well. we have all known that person. it sets us on edge, it conjurs thoughts and feelings and thats what i wanted. to me, special bands grab you with their name and their image/artwork and with their songs. its a whole, complete package sort of thing.

5.Can you tell us a little bit more about the artwork that was presented on the full length cover?

5. The artwork was something i had found one night when going through images and to me, it felt fitting. I have always tendes to gravitate toward artwork that grabs me. and its even better when its fitting with the music that goes with it. to me, it felt that the image represented the music in a way that made it feel complete to me.

6.Has the band had any opportunities to do any live shows?

6. being a one man band means there are no shows. i grew up in the punk/hardcore scene, playing shows alot. i do miss it but at the same time, i dont miss all the stuff that goes with playing shows. At this point i can pretty much promise there wont ever be any AFB live shows. however i like to think that if there were that they would not only be loud as fuck but also super intense.

7.So far very little is known about the band other than a bandcamp page, are you planning on expanding your presence in the future or do you prefer to keep a lower profile?

7. With it being a one man project (as well as being one of many of my projects) it doesnt get the attention it may deserve. at this point i dont have any plans to do more with it. For me its simply an outlet and a way to express myself, and the fact that people seem to dig it and get into it is just a huge bonus.

8.Recently you where a part of a split with 'wXdXw', what are your thoughts on the other band that had participated on the recording?

8. Well i am also part of WxDxW so i tend to like the band, lol. However it was my first experience working with the other half of the band and i can flat out say that was soo awesome and fun. super rewarding to see what they did with the songs, which to  me, elevated them so much more than i had thought was possible. definitely something i really enjoyed and look forward to being a part of in the future and doing more with.

9.On a worldwide level how has the reaction been to your music by fans of black metal and hardcore?

9. to be completely honest there has been minimal reaction/interaction with it (most of it to do with my lack of getting the word out and promotion, but also because there is alot of music coming out and alot of insanely great heavy music) however i will say that all of the interactions ive had regarding AFB have been really great and positive. I hope and think that being a part of this split as well as putting it out on Syrup Moose Records will only help and boost the profile of the band.

10. ideally id like to experiment more. Soundscapes, noise, ambient stuff while still keeping the sound and feel of the band. Alot of what i listen to "heavy music" wise finds bands trying new things or pushing themselves. which is what i want to do. Any band can throw down a 220bpm of blast beats and play heavy, fast stuff but its the bands who can do that while also adding something dynamic that really interests me. pushing your limits as a band/as a creative person. Musically, thematically, artistically. just strive to go bigger, harder, faster

11. As i mentioned before This Is Hell is a big favorite. Also Pig Destroyer (regardless of how you feel about them, their constantly changing approach and challenging themselves is something more bands should strive toward). Gouge Away is another great band. Homeskin is absolutely killer. TH Speedball is a homie who has definitely pushed me to try new stuff and challenge myself. The stuff Florence + The Machine has been putting out, while not sonically in the same realm as AFB i think is equal at least artistically to what i want to do and strive to do.

Posted by OccultBlackMetal at 5:25 PM