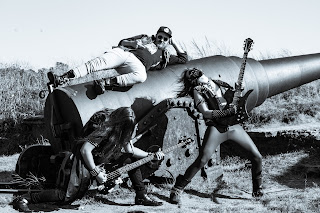 1.Can you give us an update on what has been going on with the band since the recording and release of the new full length and split?

We've been busy composing new evil songs! Not rushing though, we want our next album to be fucking sick!

The full length is actually a compilation of re-recorded versions of our older songs we did for our 10th anniversary, so it's only tighter versions of those songs that were already out! The songs for the split we did mostly in 2 weeks before the recordings, but they turned out killer!

3.What are some of the lyrical topics and subjects you explore with the newer music and also how would you describe your progress as songwriters over the years?

We just worship evil and sexual sins in our lyrics. We don't put too much thought in songwriting, we just start rocking on good riffs and then try to do a couple of more cool riffs with it and the song is pretty much done.

4.What is the meaning and inspiration behind the name 'Terror Cross'?

Cross means risti in Finnish, so in Finnish our name would be Terror Risti and which is almost written like Terroristi (a terrorist) which fits us perfectly since we are against religion and we are also musical terrorists.

5.Can you tell us a little bit more about the artwork that is presented on the split album cover?

We were thinking what it would need and just thought definitely some evil weapon wielding demon riding a sick fucking tank! Artwork is by @eye_dust in Instagram, go check his

Last show we did with Bonehunter, Rapid and Repression was definitely up there with the best! House was almost full and all the bands delivered sick shows!

As for our live presence, we just go there, play loud distorted noise while drinking beer!

7.Recently you have done some 'Carnivore' and 'Manowar' covers, what was the decision behind doing your own versions of their songs?

Carnivore cover was originally in our horrible 1st demo, so we wanted to re-do it too to make it justice because we fucking love Carnivore! Manowar one we picked because there are few things more METAL than early Manowar!

8.Recently you where apart of a split with 'Nattmaran', what are your thoughts on the other band that had participated on the recording?

We've had a little attention in the past we think but things are getting better and we've had good reactions especially lately!

Our main goal is to get to play in Japan at some point, and at the moment we are discussing some possibilities of gigs abroad.

Hellstorm bangs the drums for "the Numbshades" that just released a new EP, and is in the studio finalizing the first release for the black metal duo "Durthang Spellcaster".

We are comfortable where we are, no need to start transitioning to something else!

12.What are some of the bands or musical styles the band members are currently listening to nowadays?

We listen to stuff ranging from synth pop, old school rap to war metal. Anything that sounds good really!

Been listening to lot's of Iron Maiden, Sabbat, Voivod, Gorillaz and GZA lately for example.

13.How would you describe your views on Satanism and Occultism?

It's always good to practice evil and worship Satan!

Go get our split with Nattmaran if you:re a friend of filth and play it LOUD AS FUCK!!!

HELL IS OUR FORCE AND POWER!!!

Posted by OccultBlackMetal at 8:29 PM