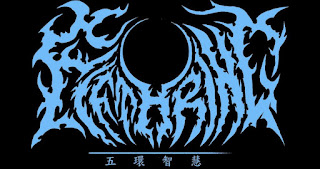 (Chris) It all started years ago when 3 young golden gods decided to bless the world with their tasty jams. The world was not ready. “You suck!” they screamed. “One string solos!” they bellowed. We bided our time and grew within the caverns of my moms basement until we became the insatiable abomination that is Fifth Ring.      (Zach) It’s like sex with a rhino, but the rhinos not really into it, ya know?

2.So far this year you have released an ep and a full length, musically how do they both differ from each other?

(Chris) Dawn was more of an experiment, we were kind of just throwing ideas back and forth but the writing process was very similar for both. Recording Dawn taught us a lot about the recording process and I think Masochist took those ideas and doubled down on them. I think we just tried to make it heavier, darker, prettier, groovier etc.

(Zach) what he said.

3.Most of the band members where also a part of 'Cthulu', what was the cause of splitting up the band and forming a new one and also did you have an interest in the writings of H.P Lovecraft back in those days?

(Chris) We were all kids then (like 17 or so) and it was easy when we had no real responsibility but as time went on, life started taking priority in our lives. We read some of the Cthulhu mythos but honestly the lyrics had little to nothing to do with Cthulhu, we just thought it was a badass name for a band and we went with it. We actually had a short-lived project called Golgothan after Cthulhu. It was basically the same music but I think it was us trying to keep the band alive. But fast forward to now, we’ve figured out a system that allows us to set aside personal time to write music, the process is much more deliberate now.

(Zach) Chris stole my favorite Thomas the tank engine train (James the red engine) and when he returned it it smelled like shit. It took a lot for me to forgive him for that.

(Chris) We’ve taken a similar approach to the lyrics with Masochist so it kind of varies. We would usually name the song based on the feelings it gave us, and made lyrics based off that. For example, The Snake reminds us of slithering, serpentine type movements. Zach took that and interpreted those ideas into his own lyrics. Very much back and forth ideas. Then you have songs like Lurking that have a more serious tone. But regardless the lyrics are still written to “flow” with the song. If it sounds good, we are gonna keep it. If not we make something else.

5.What is the meaning and inspiration behind the name 'Fifth Ring''?

(Chris) The “Fifth Ring” means the “void” and comes from The Book of Five Rings, written by Miyamoto Musashi. It basically describes the flow state that we have all experienced in some way, shape or form. It means avoiding over analyzing things and simplifying them to its core. If you’ve ever played a game or sport and felt like you were in the zone, that’s exactly it.

(Chris) I made it with my bare hands i worked hard, slaved over a hot stove to cook it up, eat up.

(Zach) No you fucking didn’t you phony.

7.The band members live in the United States and Taiwan, what impact does that have on the musical style that you play?

(Chris) I think it allow us to isolate our writing when necessary and share with the other members when needed. What i mean is we can write our individual parts without distractions, and share them, receive feedback and mold it from there. Its like our parts are unique to each member and from there they are influenced/influencing other writing processes.

(Zach) I moved away because Chris kept harassing me for my DVD collection of Thomas the Tank Engine season 6 (The best season).

(Chris) Not really but we’re not against it

9.On a worldwide level how has the reaction been to your music by fans of black metal and death core?

(Chris) Every time i leave my house i have oceans of women swooning at my feet begging me to help play just 1 riff for them. It’s a sacrifice one of us has to make.

(Zach) There he goes talking about the third graders at the playground again.

(Chris)We have no plans of stopping so I think we’re just gonna keep pushing and see what crazy stuff we can make, I think we are gonna focus on what sets us apart and double down on that.

(Chris) Funny, we never stopped listening to metal but i know collectively we all listen to much more than that. I know zach has always been influenced by Gorillaz. Big influences for me would include Suicide Boys and Shawn James but we’re also influenced a lot by video games, movies etc. nowadays I listen to a lot of different music but i think Chelsea Grin is making the best deathcore currently.

(Chris) Thank you for the time, and I appreciate getting to answer some personal questions.