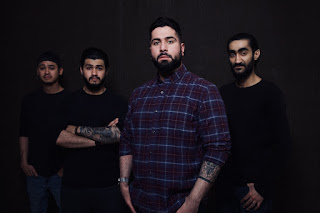 We are keeping active and staying ready.

2.You have a new album coming out in December, can you tell us a little bit more about the musical style that you went for on the recording?

Our style has always been esoteric in a way, we pour ourselves in the music and let it flow.

It is mostly involved with mythical themes, and it tells stories that resonate with events or people around us and around the world. The stories come with some philosophical approaches of nihilism, anarchism, existentialism, and some on psychology and emotions.

4.Can you tell us a little bit more about the4 artwork that is presented on the new album cover?

The artwork was specifically requested by describing the scenery of the main story of the album, that spans from Self Destruct to Facade (In respect to album track order).

At one point in particular, the ending of Facade goes through a tragedy that serves a questionable reasoning of good VS evil, the whole story leads up to that point and there are multiple events unfolding. The vocals say "Deceptor Creator" and that is what signifies the moment for the artwork scenery and album name.

We always enjoy the latest shows we play more than the previous, I think that represents how we are improving and how the crowd is getting bigger and better.

We are aiming to play more and more shows in Bahrain and neighboring countries.

7.The band is from Bahrain, how would you compare the metal scene of your home country to other middle eastern countries?

We believe Bahrain has the best potential when it comes to Metal music, it has long running bands that are true to their genre. And many talents all around it. However, Saudi Arabia and Dubai are involved with the same crowd, we love how metal brings us together across borders.

8.In 2021 you where a part of a split, can you tell us a little bit more about the other band that you shared this recording with?

In the live album 'Metal Live in Bahrain Vol.2', we shared the stage with fellow Bahraini bands Hellionight, Lunacyst, and Necrosin. Check them out along with the live album which is available on streaming platforms.

9.Currently the band is unsigned, are you looking for a label or have received any interest?

We would consider it if it serves our interests, which is mainly making more music and reaching a bigger audience.

10.On a worldwide level how has the reaction been to your music by fans of black and death metal?

It's been really good, we are very happy to see comments from an international crowd that are authentically positive. We are hoping to hear more of what people think.

We've always been influenced heavily by Gojira, Opeth, Dark Fortress, Bloodbath, and Shining. Nowadays, we are listening to Gaerea and their new album Mirage. Rivers of Nihil, Revocation and more, .

Thank you very much for the interview and your support! We hope you enjoy our album!

Posted by OccultBlackMetal at 4:48 PM