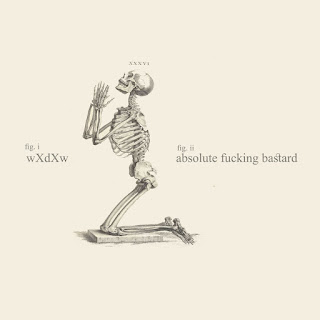 1. WXDXW is a collaboration with myself and K.M. We met on Twitter after being fans of each other's music and threw some tracks back and forth. He handles all of the music and I handle the vocals and lyrics.

2.You have a split coming out sometime in November, can you tell us a little bit more about the musical style that you went for on yourside of the recording?

2.We go for basically visceral and aggressive as a default . This split is no different

3.Its definitely a darker themed project . Lyrics dealing with paranoia, oppression, greed and the cold nature of our environment globally and locally .

4.What is the meaning and inspiration behind the name 'Wxdxw'?

4K.M. came up with it ..it's a word that immediately conjures thoughts of loss and hopelessness..the idea of how does anyone pick up the pieces ,how does anyone move on after something that changes everything. It's certainly a feeling we both have dealt with a lot.

5. I wasn't involved in the artwork for the split

6.Has the band done any live shows yet or is this strictly a studio project?

6. Its currently a studio project ,we don't have any plans to do it live yet , but who know what the future holds .

7.Recently the band was a part of a split with 'Absolute Fucking Bastard', what are your thoughts on the other band that had participated on the recording?

8.On a worldwide level how has the reaction been to your music by fans of black metal and hardcore?

8. So far so good ..I would be lying if I said it was something that was really on our minds though. It's nice to have people like what we do ,but ultimately we're just trying to express ourselves and make sounds we like.

9. I will say 2023 there will definitely be more music from us .What form that takes as far as a release I don't know yet.

10. We are both influenced by a lot of different music . Super heavy stuff , melodic stuff , goth stuff . Too many bands and artists to list .. lately I've been listening to Suicide Cages and Elizabeth Colour Wheel.

11. Our lives pretty much revolve around music . We both have several music projects and he's got the label stuff going on as well, but I don't think either of us would have it any other way

12. Thanks for having me and checking out the music ! We hope you enjoy the spit, you'll see a lot more of us in the next year!

Posted by OccultBlackMetal at 4:36 PM