Well the most important thing was finding the right label for our music and above all that accepted our musical proposal. During the research we worked on curating the image of the band, refining the design of the logo, creating a lyric video for "Molon Labe" and I personally created Greek sets and costumes for the video of "A son set his father free", and from then on we have been rehearsing our songs in the rehearsal room to be prepared for future concerts.

2.You have a new album coming out towards the end of the month, musically how doe sit differ form the stuff you have released in the past?

Well let's say that in the way of making the composition more mature with more articulated and technical guitar riffs and druming "The era of Ishtar'' we brought Sirrush more on a death metal style but we were still careful with maintaining the melodic and atmospheric lines that characterize us and which certainly will never fail.

3.This is also your first release since 2011, can you tell us a little bit ore about what has been going on during this time frame?

The main reason is the line-up, the previous guitarist and composer of had to leave the band for personal reasons, and finding a replacement capable of getting into the spirit and melodies related to Sirrush was not easy at all.

During the research I began to study guitar and over time I developed ideas that in my opinion could fit the name Sirrush, but this took years, until I met Tiyris, a talented guitarist who found the material interesting. He decided to join the band revisiting and composing other songs, and in this way we managed to complete a new album, the current Molon Labe.

4.The lyrics on the new album cover Greek History and Mythology, can you tell us a little bit more about your interest in this topic?

I just finished reading the book ''The shield of Talos" a novel by Valerio Massimo Manfredi, where at a certain point in history the protagonist is inside Thermopylae where a part of the clash between Spartans and Persians took place.

I was so fascinated and intrigued by the story that I decided to deepen this story with other books, films and various documentaries, I entered so much into that world that I was pervaded by a strong inspiration that I then turned into music so that I could dedicate an album to their epic story under the notes of Sirrush.

5.The bands name and some of the earlier lyrics come from 'Babylon Mythology, can you tell us a little bit more about your research into this topic?

The band was born as a tribute band to the Swedish Marduk, then we felt the need to start producing our own music. Our first Ep "The era of ishtar" was born.

Learning about the Babylonian culture specifically about the goddess Ishtar we discovered that at the gates of her temple a creature composed of several animal parts called Sirrush was depicted, it served as a guard to the temple. We liked the name very much and decided to use it.

6.Can you tell us a little bit more about the artwork that is present on the new album cover?

The cover is a painting made by me, the singer of the band, where through my imagination I tried to recreate the path of these soldiers inside the thermopylae guided by their patriotic and protest spirit towards the Persian threat.

The goddess Athena above them is the representation of this thought, as it shows them the way to reach the freedom denied them.

In the foreground, we see a soldier playing the Aulos (an ancient Greek flute) that was played during the war marches. It was not intended to inflame or spur souls, but to moderate and calm them.

These details serve to make the viewer of the painting experience this great moment under the notes of our music.

7.Has the band had any opportunities to do live shows?

We have been booked for some summer festivals outside Italy, in the meantime we are getting ready!

8.The new album is coming out on 'Non Serviam Records', how did you get in contact with this label?

When the album was completed we were looking for a label compatible with our genre and willing to listen and appreciate our musical proposal and among the various ones, Non Serviam Records finding our style interesting, offered us a contract. After an email exchange, we happily shook our hands!

I was afraid of this reaction as the genre was a little different from the previous work and having also composed some riffs for the first time, I was insecure because of my unbearable self-criticism! But when Molon Labe came out, it really had a big positive impact, and we got a good response and after years of work this is what pays off the most.

Well in my vision I see it in the big stages, but I know that it is not an easy path and that requires commitment and perseverance, but that's what I want to believe at the moment.

11.What are some of the bands or musical styles that have had an influence on your music and  also what are you listening to nowadays?

Well we don't know how to compare ourselves to current bands yet, however we recognize the epic and atmospheric side of our music with groups from Greece such as Astarte, Lloth, Kawir, Macabre Omen.

While my style has been very influenced by two of my favorite Italian bands which I consider my mentors: Legion of Darkness and Heruka.

That it was a pleasure to answer your questions, and that we can have this pleasure for the next albums too! 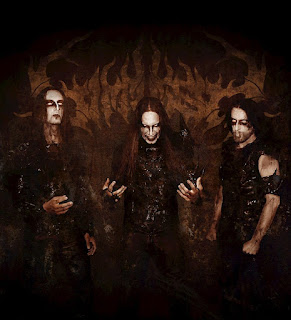 Posted by OccultBlackMetal at 8:03 PM