1.For those that have never heard of you before, can you tell us a little bit about the solo project?

Cadaver Coils took shape as a solo project during 2021. I wanted to follow a different path regarding the compositions part, comparing with what I write for Akrotheism.  So that time i found both the time and the will to complete it.

2.In May you released your first full length, can you tell us a little bit more about the musical style that you went for on the recording?

I would say that this release belongs to the the "blackened death metal" scene, since elements from both styles are obvious.

Although that I was deeply inspired from a large Death metal spectrum that I was listening to, and still do,   the black metal constituent in my style of composing will be apparent.

3,Most of your music is heavily rooted in the early 90's Finnish style, what was the decision behind going into this musical direction?

I admire this sound and I wanted to give my work a similar result. Its full of wrath and rawness and in my opinion this the way that this style has to be.  But I'm not focused only in that era. A lot of modern bands are making an impact in my songwriting. Such as Grave Miasma,  Necros Christos , and Vastum just to name a few.

4.What are some of the lyrical topics and subjects you have explored so far with the music?

* The lyrical theme on this album, is based on the grimoire "The Black Pullet". So more or less the songs are delivering the aura from this book.

5.What is the meaning and inspiration behind the name 'Cadaver Coils'?

* The name of the band is based on an image that i had came across in a gallery once, depicting human remains gathered in a circular structure. And this is how this name was born.

* The cover is made by a very talented artist. Nuno zuki, aka belial necroarts.

Despite the fact that it was not a commission, this work meets a 100% the title of the album. Every word can be seen in this artwork.

* Yes, I cooperate with other musicians at the moment for rehearsing the material of this album so as to play live in some point.

I believe that in the next release, I will not record everything by my self. Working alone may gives you freedom about doing things exactly in the way you want and fast. But on the other hand, the usage of other musicians' opinions gives another perspective and result to a work.

* Up to now i have received a very good feedback both from people that listened to this album and from reviews that i come across through internet. I would say that I'm very satisfied about how the whole thing ended up.

9.Where do you see yourself heading into as a musician during the future?

* Practicing more, and continue to give my best both in Cadaver Coils and Akrotheism as  well. I would like also to be more involved in the sound engineering section and improve in time. I haven't mentioned that i did the production of this album as well.

* As I mention before, a lot of bands have a significant role in my songwriting style.

11.Does Occultism play any role in your music?

* Occultism plays role in my music in general as a subject that attracts me and makes me study and research about it.

* I would like to thank you again for your time having this interview. 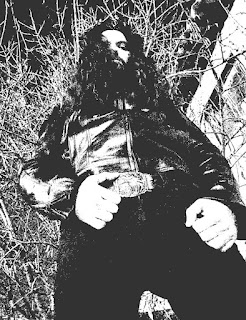 Posted by OccultBlackMetal at 8:05 PM