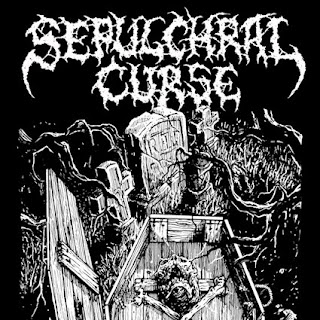 Finland's  Sepulchral  Curse  have  returned  with  a  new  recording  which  continues  the  blackened  death  metal  style  of  previous  releases  and  this  is  a  review  of  their  2022  ep  "Deathbed  Sessions"  which  was  released  as  a  joint  effort  between  Personal  Records,  Lycanthropic  Chants  and  Transylvanian  Recordings.

On  this  recording  Sepulchral  Curse  remains  true  to  the  blackened  death  metal  style  that  they have  established  on  previous  releases.  The  production  sounds  very  professional  while  the  lyrics  cover  occultism,  spirituality,  mysticism  and  death  themes.

Posted by OccultBlackMetal at 5:49 PM