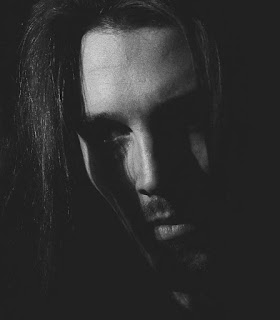 For years I’ve been listening and playing black and doom metal, It wasn’t until the UK’s National Lockdown began I was able to sit down and record some ideas I’ve had running through the back of my head for years.

2.So far you have released a single and an ep, can you tell us a little bit more about the musical style you went for on those recordings?

The musical style of the four songs featured on the ‘Kingdom’ E.P differ from each track, the opening track Hierophant is the doom track of the record, whilst the tracks Kuolla and Caedes were centered more around atmospheric black metal and the shoegaze genre. The single ‘Hyrule Field’, was recorded in just a few hours and is an atmospheric/symphonic cover song taken from The Legend Of Zelda: The Twilight Princess.

3.Your lyrics cover non-theistic themes, can you tell us a little bit more about the songwriting?

The overall lyric theme of Archierophant currently consists of occultism, spiritualism, shamanism and just a sprinkle of satanism.

4.What is the meaning and inspiration behind the name 'Archierphant'?

I pondered many names for this project over a long period of time, it wasn’t until a tarot card reading in 2019 which displayed an inverted Hierophant card I decided on the name Archierophant.

The artwork for Kingdom is an art piece by Salvator Rosa named The Witches At Their Incantations. Only half the painting was used for the E.P artwork, due to possible censorship of the left half.

6.With this project you record most of the music by yourself, are you open to working with other musicians or do you prefer to work solo?

I recorded the E.P by alone on my boat in London which at times had its challenges, due to limited electric consumption and background noise. I do enjoy working and recording with other people, you can hit a wall and it takes someone else to guide the music in another direction.

7.You also have a couple of session musicians on your ep, can you tell us a little bit more about who they are and also their contributions to the recording?

The tracks Hierophant & Kingdom showcase a talented vocalist named Kieran Scott who I’ve known for a while, he’s the frontman for a UK based death metal band named Ashen Crown, Kieran and I also have our own recording project named Grimorte, again which is blackened doom. The third track on the E.P features a Finnish black metal vocalist Sami Tuohino; who releases under the name as Oenos.

8.Currently you are unsigned, are you looking for a label or received any interest?

Possibly, I have been signed to a label before, their constant demand and requirements were too much at the time. Archierophant is a solo project with no backing band, every instrument is played by myself, which right now would be hard to turn into a touring band (which the labels seem to want).

Since the release of Kingdom I’ve had countless messages come through on social platforms, asking for merchandise, psychical copies of the E.P and kind words from fellow metal solo acts.

Over the years I have dabbled in other musical genres such as bluegrass, folk and blues where I found the fellow musicians and fans highly judgemental and overly competitive, the metal community is easily the nicest and most versatile type of listener any musician could hope for.

Currently I’m working on my other recording project with vocalist Kieran Scott, at this moment I have no plans in a full length Archierophant release, but that could change very quickly with the writing and recording of new songs. I’ve played around with a few genres in this E.P and each will lead to a very different musical path and journey when followed.

I wasn’t massively into music when I was a young child, pop music was everywhere and I never listened to it. It wasn’t until I listened to a couple of my Dad’s Black Sabbath and Led Zeppelin LP’s I realised that I was into music but just needed to find those right genres. This opened my ears to more genres of rock and metal, a few bands that I listen to regularly would be Woods Of Ypres, Rotting Christ, Satyricon and Black Label Society (also.. I’m a huge power metal nerd)

It does, here and there. I try and leave it out of the Archierophant writing as my other recording project is based around Crowley and the occult, I don’t want the two bands to be too musically or lyrically similar.

Just to say a monsterous thank you to all who have streamed, purchased and followed the Archierophant project, there shall be more!

Posted by OccultBlackMetal at 5:51 PM