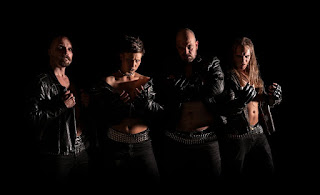 1. We've mainly been writing new songs and rehearsing them. As we speak we have eight strong tracks that are almost ready for the third Totem album. We are going to write maybe four more before we start recording the next one. But things are pretty slow right now, because of the fucking virus.

2.You have a new album coming out in February, musically how does it differ from the stuff you have released in the past?

2. Black Totem used to be a guitar and drums duo and more garage rock influenced if that makes any sense. Our upcoming album II: Shapeshifting is our first recording as a four piece band. It's heavier, darker and occasionally faster than our previous material. And now we even have guitar solos!

3.This is also your first release since 2015, can you tell us a little bit more about what has been going on during that time frame?

3. We expanded from being a duo to a four piece band in 2016. Since then the original members, myself and the drummer Tony Cash, have been showing our new members the ropes . There was a lot of practising the first few years. Some gigs in Finland as well. Mixing this album took a long time, because we were doing it with Rick Rubiini on the side. I mean Rick and everyone in the band have pretty much other stuff on our plate.

4. I write the lyrics and I tend to find inspiration in horror movies. Naturally, I'm an enemy of the church as well, so occult themes just seem fitting to fuck with organized Christianity. I feel there's some Baudelaire shit going on here as well in the sense that I like to channel my inner negativity into lyrics that are mystified through occult terminology. Like our song The Devil is not really about devil worshipping, but the wrath within oneself, a sort of inner beast, that is not wise to let out in the open, if you catch my drift.

5. Depression, conflict in relationships, toxic people, sex, cannibalism, the human condition. But it's all filtered through a lyrical mist of horror and blues traditions.

6.What is the meaning and inspiration behind the name 'Black Totem'?

6. I see a totem to be a combination of animal attributes or strengths stacked on top of each other to invoke respect. I love animals and nature, so I wanted to come up with a band name, which represents natural forces defying this lame ass human civilization. Black is my favorite color and Sabbath is obviously one of my all time favorite bands, so I wanted our band to be called Black something from the get-go.

7.Can you tell us a little b it more about the artwork that is presented on the new album cover?

7. It's a dead person's skinned head coming to life through awakening beasts. A dead human shapeshifting into something more powerful by animals.

8. We've always enjoyed playing at the legendary punk club TVO in Turku. We've played there a bunch of times. The club unfortunately closed down during the pandemic last year. We haven't played that many gigs as a four piece yet, so I think we are still shapeshifting in that department as well. But we are very dedicated to anything we set out to do. Our new members, Sam Hate on lead guitar and Wera Wolf on bass and vocals, both are very musically gifted and bring a lot of intense energy to our live performances.

9.On a worldwide level how has the reaction been to your music by fans of deathrock and underground metal?

9. So far mostly positive, which is surprising, because we haven't had high expectations, I guess. Looking forward to seeing how the album will be received!

10. The new tracks that we've made feel even darker and more aggressive. I think there will be more fast songs on the next album as well, but let's see. That's going ahead of things though, since this album is not yet released and no-one really knows what the future holds.

11. Our influences are mainly in horror punk, doom metal, blues and thrash. All sorts of old school stuff. My favorite band is Samhain, obviously. I listen to all kinds of music except modern metal, prog rock and jazz, which I pretty much hate. I like to listen to hardcore punk, goth, blues, doom metal, black metal, thrash, grindcore, some singer songwriter stuff, movie soundtracks and even fucking gangster rap.

12. Thanks for the interview! I wanna urge our fans to check out our latest videos on youtube. We have some really talented filmmakers, who made some wild videos for us and conceptually they are breaking boring molds and clichés with humour, danger and fresh ideas. Also we're gonna produce some merch in the near future, so follow us on social media and you will find out when you can go get your Black Totem shirts and other goodies.