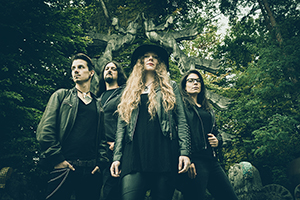 A lot! There is so much to do and to consider if you do a release all by yourself. Luckily, we have good people helping us, like Markus Eck from METALMESSAGE with the promotion. He does an exceptionally good job and is very passionate. Also, we are rehearsing to play our first gig as a full band in October. And we recently had a great shoot with Snakehill Productions for a video clip that will be released in October.

2.On Halloween you have a new album coming out on Halloween, musically how does it differ form your previous ep?

The sound is fiercer, more hypnotic and has more blackgaze and black metal influences than the EP. I also decided to use grunts because it really fits the wildness I wanted to portray in the new songs.

3.You refer to your music as being 'moongaze', can you tell us a little bit more about this term?

It's a term I came up with myself, referring to the shoegaze elements in our music and to the moon, which influences my art a lot. To be honest, I find it difficult to choose a genre for your own music, so I also kind of did it to show that it's not important at all to stick to a certain genre. At the end of the day, it should be about the music itself.

4.A lot of your lyrics cover water from more of a poetic view, can you tell us a little bit more about how long you have been interest in this topic?

I have always been strongly attracted to water, even when I was a child. I could sit by the water or swim in it for hours. I'm also fascinated by its ambivalence. Water is the basis of life in every sense; it can be soothing, but - as we have unfortunately seen recently - also very destructive. All in all, water just flows; and that's something I crave in my life: just going with the flow. Or as Eddie Vedder put it: "I'll ride the wave where it takes me."

5.What is the ,meaning and inspiration behind the name 'Wazzara'?

Wazzara is Old High German and means "the water-born". Since the project was started as a solo project of mine, I wanted it to have a name that was personally connected to me. The reason why I chose an old language is my interest in those.

I love this piece of art! It was created by Pierre Brost (www.pixelizer.de), an incredibly skilled illustrator and artist. I asked him if he could make a symbol related to the moon and its cycles, and that at the same time would be very feminine, because these themes strongly influenced the lyrics of the new album. And that's what Pierre did. I'm very proud to have his art on our new album.

7.Originally the band started out as a solo project but has evolved into a full band with the new album, can you tell us a little bit more about the addition of newer members?

I always wanted to bring wazzara to the stage, even when I started the project. But it was too much to organize at that time, so I just started on my own. When I decided to do a full-length album, I decided to do it with a full band this time. So I was joined by George, with whom I’ve been working for many years – I did the vocals in his project Between Giants and he produced and recorded the albums of my former band Caladmor – and by Mäsi, who played the guitar in Caladmor until we both left the band in 2018. It was very important to me not to have just "anyone" in the band. So I'm very happy about how it all turned out.

8.Once the pandemic slows down are there any plans for live shows?

Yes, there is! If everything stays as it is - we will play on October 9th as support for the Swiss dark metal band Dreams in Fragments. It will be our very first gig as a full band. Further gigs are already being planned, but not confirmed yet.

9.Currently the band is unsigned, are you looking for al label or have received any interest?

We are basically open for a cooperation with a label, but if, then it has to make sense for us. So, we wouldn't sign just any offer as long as we can do everything ourselves. There has to be an added value.

10.On a worldwide level how has the reaction been to your music by fans of post metal?

I am very grateful that the EP has received very positive feedback so far. Now, of course, I'm curious to see how the album will be received; but the most important thing is that you like your work yourself. And with both the EP and the album, I can say that I do.

I'm curious about that too! (laughs) I never know what will happen; for me an album is always like a snapshot of current influences and ideas that can change from year to year. But I will definitely keep the dreamy touch in the music; this element is essential for wazzara's music.

I right now listen a lot to The Cure, especially the Desintegration album.

I would like to thank everyone who supported us in our crowdfunding earlier this year. Without you there would be no new album.

Then I would like to thank everyone who listens to and enjoys wazzara's music, your support is really appreciated.

And last but not least, thank you John for this interview and for your time! All the best to you!