Feed the Corpses To The Pigs Interview 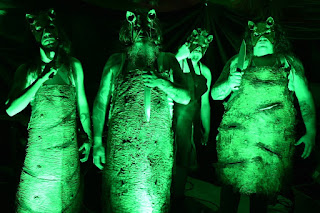 1. Can you give us an update on what has been going on with the band since the recording and release of the new album?

We have been on a bit of hiatus with COVID messing up the scene.  We are anxious to get back to shows and touring to promote the album, but we want to make sure it is safe for everyone to do so.  So instead, we are continuing to work on new songs.  I think after this album, we will just trickle out new singles for a while.  That seems to be how the music industry is going.

2. You have a new album coming out in October, musically how does it differ from your previous ep?

We wrote our first eight-song EP and recorded it within two months of forming.  We were just getting used to each other, but we wanted to have something for people to check out so we could get shows.  While it was more of a rougher demo, it did show some of our love of smashing up genres.  This album really takes all of our musical influences and allowed us to go creatively wild.

3. What are some of the lyrical topics and subjects you explore with the new release and also how would you describe your progress as songwriters on both of the releases?

On our first EP, I was writing long-form horror stories.  Stories that took four songs to tell.  With this album, I tried to write more self-contained songs.  I’m not sure this is going to be the trend going forward, but it did allow me to experiment with more styles easier.

For subject matter, while we continued with traditional horror fare, I also touched the third rail of some political ideas.  Jesus is my Respirator is a direct barrage against how religion has been handling COVID, The Death of Expertise is about social media company’s algorithms feeding people false information, and Flashpoint is about worker inequality.  I also tried to write more personal lyrics such as on I Drink Myself To Death.  I definitely want to continue that; I’ve already got a new song we are working on that causes me pain.

4. What is the meaning and inspiration behind the name 'Feed The Corpses To The Pigs'?

I wanted a name that would put a picture in your head.  Something that would be immediately memorable.  I had thought about it when reading Clive Barker’s Pigs Blood Blues and other than its unwieldy length, I’m pleased with it.

This is an interesting one on our end.  We had an amazing cover done by Riaj Gragoth at @luciferiumwargraphics.  He had done our last EP and he also designed our awesome logo.  When we were working with our new label Horror Pain Gore Death, they wanted us to do a full album.  As we were working on the new songs and the album morphed in tone, we felt like we needed a different album cover.  It so happened that Andreas Christanetoff (Armadda Art) had a random one-off piece of art (he usually only does commissions) and it really felt like the horror that we wanted to work with.  The best part, though, is BOTH album covers have been designed as t-shirts at HPGD and will be available for pre-order on the 15th of September!

6. What are some of the best shows that the band has played so far and also how would you describe your stage performance?

I think our live show stands out.  I’ve got a dark sense of humor, so I riff with the crowd on horrible stuff.  We also have a friend who works in latex and makes us a variety of body parts that we throw at the audience.  Come to our show and you might get a unique souvenir.  From the start to the end, there will never be dead air… we do our best to entertain outside of just playing songs.

When really only formed a bit before COVID hit, so we haven’t got to play a lot of shows.  We did have an excellent show with Luna13.  It was a ton of bands playing at the KrampusFest event.  In fact, we wrote a song specifically for KrampusFest, The Ghost of Winter, which is our first video and also features Rick Rozz from Death/Massacre.

7. Do you have any show plans once the new album is releases?

We were just setting up shows before this new spike hit.  So, we will get out there soon!

8. On the new album you also have some guests, can you tell us a little bit more about who they are and also their contributions to the recording?

We have worked with some of the best in metal!  As I mentioned before, Rick Rozz is on our album.  I had written a song and thought it would be awesome to have him on it.  I sent him the unsolicited track expecting crickets, but he loved it!  He was willing to go to a local studio and do the leads for free.  It really let us know we were onto something.

COVID and injuries had hobbled us, but we wanted to go through with finishing the album.  We reached out to Daniel Torgal (Analypse / Enblood) with some of the beats our drummer wrote so he could help us finish up.  He is flipping awesome.  He not only understood what we wanted, but he found a ton of ways where he could insert his personality into our songs.

Finally, we got to work with Will Putney (Fit for an Autopsy) to master our album.  His ears helped create the crushingly heavy tones you can hear on the new LP.  When we have worked with engineers in the past, we usually have lots of feedback.  Will killed it on the first try.

9. On a worldwide level how has the reaction been to your music by fans of extreme metal?

I think people worldwide have been digging the costumes and the material.  For a band with little touring, we managed to rack up 5,000 fans on Facebook from all over the globe.  With the new album, it appears that everyone gravitates to different songs.

I would probably like to add a bit of ambient keyboard in some places.  We were trying to do some last-minute collaborations, but unfortunately it didn’t pan out.  Keyboards could help fill in some extra horror.  Otherwise, I think we will continue to look at the horrors of the human condition rather than just some murder and gore material.  I think, though, we will just continue to mix styles as they fit.

11. What are some of the bands or musical styles that have had an influence on your music and also what are you listening to nowadays?

All of the members of the band listen to different music styles and definitely different metal styles.  For me, I listen to a ton of punk rock.  I think you’ll find my love of repeated choruses in our music.

Today on my walk I was listening to a mix of Fuck the Facts (Pleine Noirceur), Pears (Self-Entitled), and Vader (Solitude in Madness).

Yes indeed!  We want to thank you for supporting the metal scene!  There is very little money in music and it is almost non-existent in metal, so when anyone is willing to dedicate their time to working with bands, we have the utmost respect for them!  Thank you for taking the time to do this interview!

Check us out at:

Feed the Corpses to the Pigs on Facebook:  www.youtube.com/channel/UC5G7gwIpPWdvh0ioxj--jDA

Feed the Corpses to the Pigs on Instagram:  www.instagram.com/feedscorpsestopigs/

Feed the Corpses to the Pigs on Reverbnation:  www.reverbnation.com/feedthecorpsestothepigs

Feed the Corpses to the Pigs on Spotify:  open.spotify.com/artist/4WTUlGxVs7lBHfA3kxj9g9

Feed the Corpses to the Pigs on Bandcamp:  feedthecorpsestothepigs.bandcamp.com/