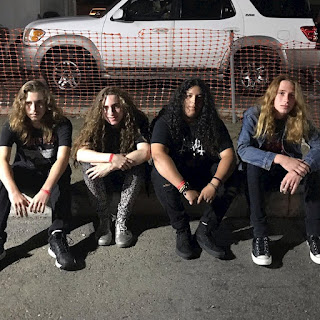 We are a teenage, blackened thrash group from LA who just released our first album, "Nobody Believes Me". We were brought together by the dark lord himself, and our goal is world domination.

2.Recently you have released your first album, can you tell us a little bit more about the musical style you went for on the recording?

We tried to blend the hooks and epic riffs of classic metal with a modern metal sense of brutality.

. Our lyrics describe dark fantasies. Some of them are more surreal and medieval, and others are more simple and grounded, but there’s always an element of violence and escapism.

4.What is the meaning and inspiration behind the name 'Diabology'?

My dad suggested the name after he read it in a book about Satanism. Diabology is the study of evil. It tied in with the lyrical themes, and it sounded cool, so it stuck.

We got a really talented artist, Anditya Dita, to draw it for us. We gave him our initial concept based on our band name, and he just took it from there. We’re super happy with how it turned out!

We recently played a show at the Smell in downtown LA. That was a lot of fun. We always try to make our shows as energetic and chaotic as possible

We’re not going on an official tour, but we’re constantly playing shows all around SoCal.

We have submitted the new album to a few labels, but that was extremely recent and we still haven’t heard back yet. Fingers crossed

Really good! Except for the two Russian guys who told us that we should stop jerking off our guitars. But other than that, really good!

Death, Trivium, Metallica, Gojira. Lately, I’ve been listening to a lot of Baroness.

Every Tuesday, I strip down and hold a ritual to communicate with the dark gods of Ishkatuu. I’m also a pretty big gamer.

. Hail Satan, worship doom, and listen to our album!