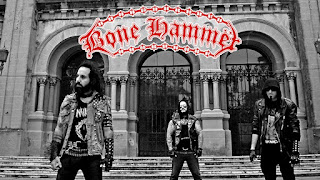 1.For those who have never heard of you before, can you tell us a little bit about the band?

Bonehammer is born from the need to express the darkest feelings we carry within, from an experiential yet unhinged point of view within the frame of a clashingly primitive sound with heavy and aggressive visual imagery.

2.In August you had released your first album, can you tell us a little bit more about the musical style you went for on the recording?

Without being limited by a single style, the sound of the band is linked to the first wave of black metal, considering bands like venom, bathory, hellhammer and sarcofago together with the speed of bandas like discharge and gbh. All of that, mixed with our personal experiences result of living in a heavily punished country with so few opportunities being so far south in the world.

3.Some of your lyrics cover Satanism, Occultism and paganism, can you tell us a little bit more about your interest in those topics?

These themes are related to ancestral fears, to the deepest roots that cannot be explained by science but that help manipulate millions of minds and sculpt realities of those who believe in the inexplicable

The unfortunate occurrences that happen to people who try to live in harmony, the unity produced when trying to feel represented by an evil sound and an excess of hope that only tears down the true purpose of mankind.

5.What is the meaning and inspiration behind the name 'BoneHammer'?

The name is inspired by primitive tools used by mankind and their connection to art, to hunting, to war and music which are all the first creations born in societies grouped together in unison.

The cover art is a reflection of the sound within, everything was thought through to create maximum impact and so that whoever is listening to the combination of music types that compose this album can feel transported to a higher level where music and aesthetics are intertwined.

7.Can you tell us a little bit more about the masks you wear in your stage performances?

Each live performance is one of a kind. The idea is to create an increasingly bigger impact each time we perform without the fear of bordering illegality while trying to constantly surpass our own limits.

8.Out of all of the shows that the band has played so far which one stands out the most?

What makes us feel alive is the possibility to create and compose new music represented in these shows and live performances which are actually a cult to life, but what we want is to create a cult to death.

9.Do you have any touring or show plans for the future?

We've received many invitations to perform so far but at the moment we are still waiting for the perfect fit to match what we are aiming towards as a band.

10.You have also done a few cover tunes in your stage performances, what are some of the songs you have covered?

We like to cover songs from bands that we feel represented by and connected to. There isn't a set plan for this but so far we've gravitated towards songs from Bathory, Venom, Sarcófago, Merciful Fate, etc.

11.Currently the band is signed to 'Awakening Records', can you tell us a little bit more about this label?

It is a record label that supports bands fighting from the underground from all over the world and working with them helps us get closer to our goals of world domination.

12.On a worldwide level how has the reaction been to your music by fans of underground metal and punk?

Everyone who listens to us can feel what our essence is about, not just in our music but in what we are, what we do and why we do it. It's a connection that goes beyond anything else because you can feel that what you hear is composed by someone on the same emotional wavelength as yours.

13.What is going on with some of the other bands or musical projects these days that some of the band members are a part of?

Everyone who is a part of Bonehammer has other musical projects we work on which are: Orgullo Fisura, Velocidad 22, Feel The Knife, Vulcanor, etc. We've performed together on some of these other projects as well and because of this, in Bonehammer we have found the way to express things that we can't express in these other bands.

14.Where do you see the band heading into musically during the future?

We feel like the road has already been laid but what we have to do is delve deeper into each of the notes we have chosen as our musical identity. We want the dark to be even darker, the rotten to be even more putrid, and the slow parts to be even slower. We want to show the best and most extreme version of ourselves.

15.What are some of the bands or musical styles that have had an influence on your music and also what are you listening to nowadays?

We don't think there are any particular examples of bands that influence us, although we might be very interested in their sound. We think that what creates our individual sound comes from our personal experiences and points of view.

16.Before we wrap up this interview, do you have any final words or thoughts?

The truest and purest feelings lay in the underground. The rest is just ideas or proposals created to sustain the privileges of musicians who live off of the music but not actually for the music.

Posted by OccultBlackMetal at 2:42 AM