JB: Alot! 2019 has been a wild ride! All was recorded during winter and as from then we have been on the road playing gigs and indulging massively fucked up sessions all over the continent. Also we scored a deal for this album with High Roller and are making solid plans for the future as we speak.

2.In February you have a new album coming out, musically how does it differ from your previous ep's and demo's?

JB: I think it’s much more well measured and effective. Resulting in harsher aggression and a better flow and drive throughout the songs. Don’t confuse this with too much maturity, we are still an unbridled collection of savages.  Also not focusing on particular styles of metal but just keeping the pure metal thought has lead us to more varied songwriting.

3.This is also your first release since 2016, can you tell us a little bit more about what has been going on during that time span?

JB: We have been playing live a lot and all over. Musically the album was ready already before next year but we were playing so much that it got hard to pin dates for recording. Which turned out well, as we did get to take the time to revise all songs ‘meticulously’ (in a savage way of course) before recording in the end.

4.Some of your lyrics deal with witchcraft and witch trials, can you tell us a little bit more about your interest in those topics?

JB: I am interested in not much more than death, decay and heavy metal. I leave this to the authors of said lyrics!

LS: My lyrics are more inspired by stories, a bit like King Diamond lyrics, every lyrics I wrote are mostly stories of things that come out of my head...it treats witchcraft but also paranormal, satanism, demonology.

LS: nothing special except sorcery, satanism, witchcraft and paranormal.

6. What is the meaning and inspiration behind the name 'Slaughter Messiah'?

RD: So, it's very simple and not especially original: when we founded the band, we searched for a violent name never used before. The first idea was brought by the first supposed singer of the band (the currently Heinous singer): Infernal Slaughter Messiah Of Hell. But as you know, it was a little bit too much so we simplified the name to "Slaughter Messiah".

The artwork, and all drawings you will find inside and outside, has been done by the notorious figure Rok from Sadistik Exekution. Sabathan had already worked with him for an old Enthroned album and as we all love his savage art style we asked him to come up with something. We sent him some music and lyrics and told him to let his mind speak to his canvas. The result is what you see, clearly signed by the hand of the master. It’s great how dark it turned out but still catches the eye with some brighter touches.

JB: We often talk about the show at Evil Or Die as one of our key performances last year. But of course one of the best experiences was Summer Breeze and I always love the club shows together with allied bands. Live we try to bring you a breathtaking plethora of violence and heavy metal attitude. No nonsense, no ceremonies, no triangle ridden rituals or other non metal related tomfoolery. We intend to make you feel the steel so many metalheads are on about. It is also what we love to do above all, bring our metallic energy to a live crowd and see how they interact.

9.Do you have any touring or show plans once the new album is released?

JB: The weekend are filling up nicely with shows so far. What we would need is a proper booker to help us with this as we are very DIY now and starting to lack the time to take care of all that. No major tours planned yet but we will see what comes up. We have a few topological gaps we would love to see filled up!

10.On a worldwide level how has the reaction been to your music by fans of black, death and thrash metal?

JB: Reviews are only dripping in now, I suppose the big wave will follow in the week before and then after the release date. But so far all of them have been very positive! Reading through most of them I notice we are much more considered a thrash metal band than anything else… even though we have a lot more to offer in our genre portfolio, or am I getting old? Because when I think Thrash, I think Testament, Slayer, Forbidden, Kreator and so on…?

JB: We will all speak or ourselves here. With Nocturnal we just released a split EP with Nuctemeron and are planning to record a new album soon. Aside from that shows are filling up for this year and it’s looking really good so far. After that I am working on a few things that have not been announced yet and some guest performances but can’t say anything more until it’s all confirmed and written in stone.

RD: With Heinous, we're currently working on our first album and the first live shows will be announced very soon. The sold out first demo will be rereleased but the information will be shared in due time.

LS: With Sabathan we continue playing everywhere the old Enthroned tunes and as I said earlier is not impossible that we’ll start composing new material for an album this year.  My other band is Heinous, pure hatred medieval evil darkness ...I share this band with IB Desecrator and T.Exhumator, the first demo 4 tracks released last year received an incredible success and the 7 inch EP « Lucifer’s Vult » this year as well, now we work on the full length album which will be recorded this year around April/May.

JB: The same thing but better and more extreme maybe? We are chiseling out our own musical definition and path and we love the stuff we made so let’s keep chipping parts out of that piece of granite.

13.What are some of the bands or musical styles that have had an influence on your newer music and also what are you listening to nowadays?

JB: Most of the time I listen to traditional heavy metal, nwobhm and classic rock, early death metal, 90s black metal and 80s thrash/speed metal - to sum it up all very very concisely. All these things will definitely echo back in the beats I come up with. The four of us have a wide musical culture, each with his specialties or main influences. Personally I am going through one of my infamous hair metal periods mixed with the latest Lankum (cheers Liam) album that I just can’t resist playing every few days at the moment.


14.Before we wrap up this interview, do you have any final words or thoughts?
JB: Thanks for your support & interest I want to say first of all. Hopefully we will make it across the pond soon! 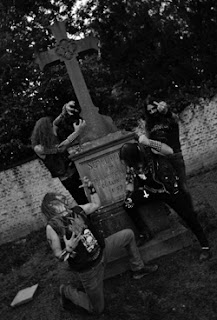 Posted by OccultBlackMetal at 12:29 PM