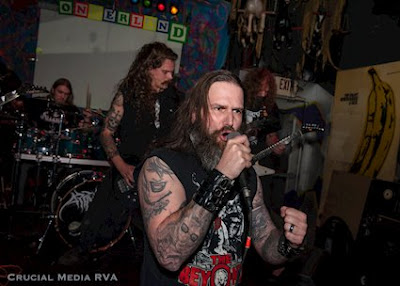 1.Can you give us an update on what has been going on with the band since the recording and release of the new album? Inverted Realm doesn’t officially release until May 3rd, but we did an album pre-release show in our hometown RVA at Wonderland which was a blast. We have just been trying to play as many shows as possible and we are planning a late summer tour to support the album. We have been writing new material as well and tentatively plan to get back in he studio in the Fall.

2.Recently you have released a new album, musically how does it differ from the stuff you have released in the past? Other than the obvious lineup changes, I believe we have become tighter and more focused as a band and this album is better than the last. The goal is to always try to continue to outdo yourself and I think we did that on Inverted Realm.

3.Some of your lyrics cover occult topics, can you tell us a little bit more about your interest in Occultism? I’d say we all have a strong interest in the occult in one way or another and are knowledgeable on the subject. A lot of the themes on Inverted Realm are more just plain anti-Christian than any specific occult ideal or ritual.

4.What are some of the other lyrical topics and subjects you have explored so far with your music?
The song, Epileptic Sermon, is about a serial killer. A Mutilator at Large, is a homage to Giallo style horror films, and Artifact and Vessel delves into demonic possession. Themes of horror and Appalling things.

5.What is the meaning and inspiration behind the name 'Appalling"?
We wrote the song, Appalling, which is on our first album before we came up with a band name. After throwing around a bunch of other names we landed on Appalling. The lyrical theme of the song Appalling is about a serial killer who targets prostitutes and kills them while making their pimps watch in sadistic fashion.


6.Can you tell us a little bit more about the artwork that is presented on the album cover? The artist Joe Keinberger is a friend of our bass player. I’m not sure what his inspiration was,  but it just looks sick as hell so we went with it. There is a lot going on in the background upon looking deeper at it.

7.What are some of the best shows that the band has played so far and also how would you describe your stage performance? We did a tour back in January with our buds in Deathcrown and the whole thing was great, Miami was the highlight though. Las Rosas club was fun as hell. We give it all on stage. It’s high energy just like the music. The goal is to put on a show and we continue to add to “the show” as we develop.

8.Do you have any touring or show plans for the new album? There are plans for a late summer tour. Stay tuned on that.

9.On a worldwide level how has the reaction been to your music by fans of black and death metal?
So far so good. We hope to keep reaching more and more people. We have only scratched the surface.

10.Where do you see the band heading into musically during the future? We don’t think too much about writing a specific way. Whatever comes out comes out, but it’s always fast and evil. The new material we have been writing is faster and blacker.

11.What is going on with some of the other bands or musical projects these days that some of the band members are a part of? Our drummer “B” (Balgrath)is doing live shows with the black metal outfit Automb. Our bass player “JA” has a grind core band MSD and a thrash band Murdersome who are both active. Guitarist “JK” is in the speed rock band US Bastards.

12.What are some of the bands or musical projects that have had an influence on your music and also what are you listening to nowadays?
Darkthrone, Dark Funeral, Celtic Frost, Sargeist, 1349, Satyricon, Marduk, Morbid Angel, Slayer, Gorgoroth, and too many others to list. I’ve been jamming a lot of war metal lately. I can’t get enough Sodom and BoltThrower. Also loving the new Nordjevel album!

13.Before we wrap up this interview, do you have any final words or thoughts?
First, thanks for your time. Lastly to everyone who reads this, look out, Appalling is coming for your throat!

Posted by OccultBlackMetal at 9:28 PM