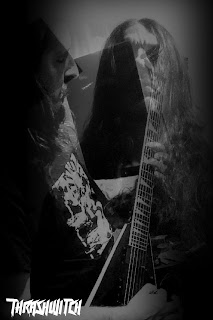 * Well, we formed in July of 2019. Will Martell (guitar) and I jammed in a short lived project for a few months beforehand with another friend, which was more punk based. We decide to start our own thing based solely on our own influences after that fell apart. Will and I are deeply rooted in the 80's and 90's Thrash/Black/Death Metal style and we wanted to reflect that in our music.

2.Can you tell us a little bit more about the musical style you have went for on your recordings?

* As a band we wanted to put out some singles and at least one EP as a two piece, establishing our "sound", before taking on any other permanent members. On the "Atomic Sickness" single and "A New England Folktale" EP/Demo we went for a early 90's lo-fi black metal production. Very raw and dirty. Two mics on the drums, no triggers... then recorded everything else afterwards in post-production. Will provided the guitar, bass and backing vocals and I layed down lead vocals. We did pretty much the same thing with the "Electric Talons" single (released on Halloween) just with a better recording on the drums. If I had to compare us to any other bands I'd have to say : Slayer and Metallica go to a house party in 1986 hosted by Immortal to watch a heavyweight boxing match between Black Sabbath verses Morbid Angel with special guest referee Hayaino Daisuki.

3.What are some of the lyrical topics and subjects the band has explored with the music so far?

* Thrashwitch is a New England (United States) band. So our lyrics reflect that, keep or lyrical content within the boundaries of New England folklore and history (Maine, Vermont, New Hampshire, Massachusetts, Connecticut and Rhode Island). There are defiantly no Game Of Thrones dragons or rape-monsters fucking uncooked hamburger patties in our music, hahaha. The inspiration for the EP songs are as follows :
# The Origin Of Darkness (The Salem witch trials occurred between 1692 and 1693. More than 200 people were accused of practicing witchcraft, 20 were executed.)
# Driven To Suicide (Massachusetts teen Conrad Roy was driven to suicide with encouragement from his "girlfriend", Michelle Carter, via text messages.)
# Airborne Annihilation (During WW2, the USAAF took control of T.F.Green airport in Warwick,RI to train pilots for fighter planes and bombers.)
# Atomic Sickness (Victory Day a.k.a. V-J Day, commemorates Japan’s surrender to the Allies in 1945, which ended World War II after America's atomic bombs dropped on Hiroshima and Nagasaki, killing an estimated 226,000 civilians. Rhode Island still celebrates the death of thousands of war victims each year.)

4.What is the meaning and inspiration behind the name 'Thrashwitch'?

* We just wanted something that sounded evil and 80's as fuck, hahaha. We're both big thrash metal fans and the New England connection to witches, vampires and angry ghosts seemed appropriate.

* It's from a photo I took at our studio that I manipulated in photoshop. The EP cover art represents darkness and power. A faceless, uncontrollable chaos.

6.Currently there are only 2 members in the band, are you open to expanding the line up or do you prefer to remain a duo?

* We are defiantly expanding the group. We've just recently acquired bassist Greg Leclerc to the group. Greg is a great bass player and apparently some kind of mathematician-alchemist (who knew?). We'll be focused on the release of a new single in early 2020 with him and adding a lead vocalist so we can play out live in the spring/summer.

7.Currently the band is unsigned, are you looking for a label or have received any interest?

8.On a worldwide level how has the reaction been to your music by fans of black and thrash metal?

* Thrashwitch has received a very positive response from the Thrash/Black metal community overall. We're starting to catch a little fire in the Philippines and out in the Nordic countries.

* Yes, hopefully a full length by mid-2020. We'll be capitalizing on our existing sound moving forward.

* You know, the usual suspects... (old) Sepultura, Morbid Angel, Napalm Death, Obituary, Black Sabbath, Sodom, Immortal, (old) Metallica, Slayer, as well as some obscure stuff like Hayaino Daisuki and Assuck. Currently I've been blasting Batushka - Litourgiya (2015), Despite all the internal drama with that band, their debut album is not to be denied. Dark and beautiful black metal. I know Will is a big fan of Havok.

11.Does Occultism play any role in your music?

* Not directly. Plentyyyyyyyy of other bands have that covered

* First off, Thrashwitch would like to thank you for the interview. Entities such as you and your publication help the underground music scene with their support and love of all things extreme. We can't thank you enough. Thank you.

https://thrashwitch.bandcamp.com/
Posted by OccultBlackMetal at 4:17 PM