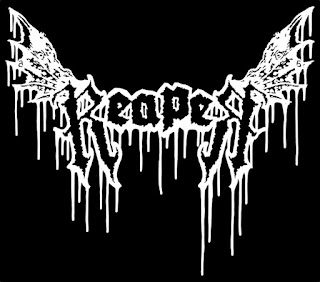 
Well… We’re a two-piece entity. Me, Flaggelator, and Impaler. Formed in the end of 2018, just before the recording of the demo. We’re from the outskirts of Sweden. Bergslagen. Nothing much here really at all. Besides hollowness, hardship and slime. It’s a piece of land with colliding interests. A shipwrecked soul with an undying philosophy to expand into the heavens. A lot to be said really, but that’s evidently always besides the point. Reaper is a lust for metal. A knuckle in your face, a sweet embrace of putrid death. It’s something to do. A little something between the oceans of emptiness.


2.You have your first full length coming out in 2020, musically how does it differ from the demo you had released in 2019?


Nothing much really. Reaper is and has always been about creating something that rings true to our idea of what metal should sound like. Something raw, barbaric and unadulterated. Nifelheim said something about their sound in an old interview that resonates; ”a tsunami of slurry manure”. Guess we’ve got something of a better soundscape this time on, production-wise… I mean… there’s one or two things considered compared to the demo, which pretty much just happened. A thicker sound? Well… Maybe. I guess. Some songs now are more fleshed out… more in the vein that we intended at first, but never had the patience to accomplish in the beginning.


3.Your music is very heavily rooted in the 80's style, do you feel extreme metal has been watered down over the years and has a less extreme outlook compared to past bands?


Sure… most bands and sounds that we like originates from the 80’s and 90’s. If you like to have a narrow-minded look at things, that’s when it all congealed and got a proper form. THE form if you like… We like that era. Where thrash was just about to go off into the obscurity of death and black. Fast, violent and raw. But it would be ignorant to dismiss the attempts that’s being made now to take it all some steps further, although that’s not our mission or interest. There’s a lot of great things being done out there still.


4.Some of your lyrics touch on the occult, can you tell us a little bit more about your interest in this topic?


There’s always been an attraction to those things I guess. In a more shallow or, if you like, real sense. But nothing in Reaper is oriented around those things. It’s not a wessel for religious worship. Sure… we call upon the occult, but more in the sense of using those things as symbols for what’s real; the things that stabs you with a knife in the back or the metastasis in your ass. We can dabble on about luciferianism and to ”do thy will”, but that’s besides the point. Reaper is beyond reverence… beneath and against the servility of laws. We just don’t care. We read, observe. And learn. At best.


5.What are some of the other lyrical topics and subjects you have explored with your music?


Pessimism I guess. That’s the overall theme… Yes. Pessimism. To gaze into the real. The void.


6.What is the meaning and inspiration behind the name ’Reaper'?


Pure and simple; it’s lifted from the track ”Reaper” by Bathory. From the self-titled debut. Genius stuff. Important. Mandatory. And sure... we like the connotations of death that it brings. And the fact that you always reap what you sow. Everything is up to you. There's nothing out there that can respond to your cries, not the real ones anyways. The ones that matter.


Sure. no problem… It’s a collage of images. Made/compiled by me. Technically, a collection of etchings and woodcuts by artists from the 15th, 16th and 17th century. It’s supposed to symbolise the gospel of nothingness; the roaring silence of the void. The church where everything collides and turns to dust. The inversion of of belief, the anti-human need.


8.Currently there are only 2 members in the band, are you open to expanding the line up or do you prefer to remain a duo?


It’s pretty crowded as it is. But there’s been some discussions about taking this thing live if the right opportunity rears its ugly head. If that’s the case we’ll be a force to be reckoned with. A lot of old-school fire power. Whatever happens we’re going to be at most two doing the songwriting. As I said; two is pretty crowded as it is. Pure and simple is the game…


9.The album is coming out on 'Iron Bonehead Productions', are you happy with the support that they have given you so far?


Very happy. The service is awesome and the word exchange is sparse but efficient. Looks like they’re doing a good job promoting the stuff also, considering we’ve got no social media platforms, homepages, e-mails etc… Come to think about it; how did you get this e-mail adress? Our usual motto is FOAD when it comes to the social aspects of things.


10.On a worldwide level how has the reaction been to your music by fans of black, thrash and speed metal?


Good question… We don’t care really. That being said; haven’t heard anything negative. Think they like it…. Understand it, that it have to have a place. Don’t mean to be assholes about it; just wanna emphasise that we know how we like it and abide to that fact. We do this in a way that it comes out in a fashion that we can stand for. We do this because it makes hell bearable. We know what’s called for and we do it. Pure…Simple…


We’re not about either future or progress… That in mind I guess we’re only in it for the worse. We’re gonna continue… In some form or another. That much we know. Some kind of continuation. An extension of existing form.


Sure… We mostly dig in the past. Sometimes in the underbelly, but mostly in th more classical stuff. The usual grind; Necrodeath, Kreator, Sodom, Vilolent Force, Slayer, Autopsy, Urban Waste, Dismember, Shizo, Exodus, Sadus, Deep Wound, Mayhem, Wehrmacht… But. There’s a lot of contemporary stuff that’s happening that’s really great too. You’ve got Nekrofilth, Töxic Death and the whole of that ”scene”, Obnoxious Youth, Warthog, Funeral Mist… And then there’s gangs like Marduk. True troopers… Seems like they’ve been here since the dawn of times and they’re still ripping spines thorough assholes. Tremendous. I know there’s been a whole lot about their ideological leanings, but that always have to be besides the point. They rip. Period. Pure Armageddon. But… There it is again. The voice in the fog of the mind… Anti Cimex, Cortex, Deep Wound, Blood Feast… FUNERAL MIST! Fucking bliss!


We’ve compiled a new EP. It’s already mastered and ready to be employed. ”The Atonality of Flesh”. But guess it’s a bit early considering the LP isn’t out yet. We’ll see. Other than that; Play fast. Keep the double bass drum to a minimum. Keep the riffs based on single string knock-outs. Make the riffs congeal with one another. Bow to the goat of Medes, crawl into the crevice that’s Christ, read a book, draw conclusions, behold, await, transcend, be still… Build a war. 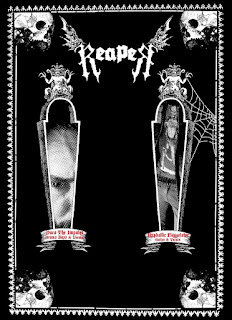