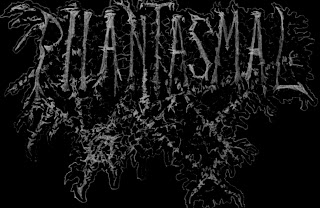 .For those that have never heard of you before, can you tell us a little bit about the band?

- The band was formed by me and my brother Niilo back in 2010. We had played cover songs and own music, some kind of thrash metal, together already, but then we changed the musical style to old school death / doom metal and named the band Phantasmal. We recorded a couple of demo tracks the very first years but then had quite long break, mostly because we both were in another band, Oppressive, and didn't have that much spare time to other projects. Later, in 2016 or something like that, I started to write new music and decided to release it as Phantasmal.

2.In 2019 you had released your first album, can you tell us a little bit more about the musical style you went for on the recording?

- As I said, Phantasmal's demos were more like pure death / doom. When I started writing these new tracks, I didn't want to be limited in any specific genre. The musical style is still strongly based on death / doom, but there is more black metal elements as well as some progressive elements on this album.

3.What are some of the lyrical topics and subjects the band has explored with the music?

- The most important subject on this album is how human beings are born in a society and a way of living that is not sustainable or good for themselves and how hard it is to get rid of all those things.

4.What is the meaning and inspiration behind the name 'Phantasmal'?

- I think we came up with that name because it describes the atmosphere of our music.

- Artwork is made by Niilo, there's a person in a place that doesn't seem to offer what he really would need.

-We have never played live.

7.Do you have any touring or show plans for the future?

- Not really plans, more like wishes. My brother moved to other side of Finland and haven't been playing drums for a while, so actually there's no line-up at all right now. But I'm looking for a full line-up to continue making new music and to do shows.

- Yes, as soon as I get a line-up for a new album, or even a session drummer, I would be happy to release it with a label. I have the second Phantasmal album almost written, but without a drummer it's pretty hard to get recorded.

- I think the reaction has been positive and people have found the music interesting overall, even though not so many people have even heard about us because I'm not that great in marketing.

- I'm also playing in a death metal band called Surman Suu, and we just released our second EP Kunnallisteurastamo which you can find on Spotify, Youtube etc. or: https://surmansuu.bandcamp.com/album/kunnallisteurastamo

- Maybe some more elements and influences from black metal and doom metal and some progressive stuff. As I said I don't like limiting myself to any genres too much, but on the other hand I want to keep this band based on death metal, so it is not getting to be too clean, produced or nice.

- Back to when we started this band, the greatest influences came from Triptykon and Asphyx and I think they're still there. Other bands you could hear from our music would be for example Entombed, Moonsorrow, Ajattara and Kuolemanlaakso. I'm listening to many kind of music, so also bands like Metsatöll, Jethro Tull and Alamaailman Vasarat, a great Finnish instrumental band, have affected me but I don't know if you can hear that on Phantasmal's music so much.

- I've been learning some painting and tattooing lately, so visual arts are important for me as well.

- At the moment I just want to find a drummer, after that I can propably think of something clever to say.

www.facebook.com/phntsml
Posted by OccultBlackMetal at 10:38 PM