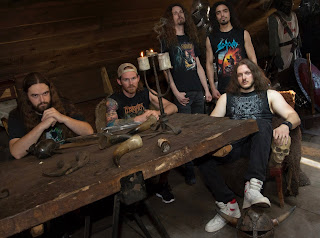 
Gabe: For sure! We are a 5 piece Canadian death/thrash based out of Waterloo, Ontario. We formed back in 2017 and dropped our first CD Urge to Kill a year later in 2018. We spent the last couple of years playing as many shows as we could and took the time to craft our newest record, Guardian of the Fire!


2.You have your first full length coming out this month, can you tell us a little bit more about the musical style you went for on the recording?


Gabe: Our new album Guardian of the Fire definitely has way more death metal influence than 2018’s Urge to Kill. The songs are tighter, faster, more aggressive and just better songs in general. The lyrics too, a lot more time was put into implementing the lyrics into the music.


3.Your lyrics touch of dark arts, mythology and horror themes, can you tell us a little bit more about your interest in those topics?


Angelo: Honestly, those were some of the topics we listed when the guy from Metal Archives reached out to us haha… but they definitely still hold true. I think music is a great way to tell a story and every song/record can be used to accomplish this. The themes of truth, conquering your own darkness, and portents of evil are more definitive of Guardian as a record. I tend to use mythology and dark imagery as vehicles for these themes.


4.What is the meaning and inspiration behind the name 'Raider'?


Gabe: We were looking for a name that described the right amount of aggression our sound was putting out and the name Raider really stuck out after trying a bunch of other ideas.


5.Can you tell us a little bit more about the artwork that is presented on the album cover?


Angelo: Our artwork was done by artist Mario Lopez, a genius and household name in metal and especially thrash. It is a very literal interpretation of the title Guardian of the Fire. I think the lyrics of the song really speak to what this means and why we chose this imagery, check out our lyric video for it on The Circle Pit youtube channel: https://www.youtube.com/watch?v=MlspTM4cVpw


6.What are some of the best shows that the band has played so far and also how would you describe your stage performance?


Gabe: Some of the best shows we’ve played have been at home with packed houses over the years! Some other really notable shows were Quebec City with Skullfist and Toronto with Venom inc. and Exmortus!


7.Do you have any touring or show plans once the new album is released?


Gabe: The goal is to play as much as we can this year and promote this new album! How active we actually end up being is all going to depend on the state of this worldwide pandemic going on right. Hopefully, things start to clear up by the summer and we can get the ball rolling!


8. Currently you are unsigned, are you looking for a label or have received any interest?


Gabe: We are indeed currently running as an independent band but are definitely interested in looking for a label to back us up for our next CD!


9.On a worldwide level how has the reaction been to your music by fans of black, death and thrash metal?


Gabe: So far the reaction has been awesome from everywhere around the world! Everyone who has checked out the new songs have said nothing but good things and with that being said we really appreciate the kind words!


10.What is going on with some of the other bands or musical projects these days that some of the band members are a part of?


Gabe: We don’t really do too much other than Raider. Our bass player Brandon has an Iron Maiden tribute band as well a black metal band. Other than that, we are solely focused on reaching our musical goals with Raider!


Gabe: Honestly we are still developing our sound so who knows where it will be in years to come haha. One things for sure, our next record will have a lot more death metal influence.


Gabe: We listen to all sorts of stuff. From old school to new bands coming out. As of late, we’ve been cranking a lot of creeping death, skeletal remains and exmortus!


13.What are some of your non musical interests?


Gabe: In terms of hobbies and careers, we all have our own different interests ranging from cooking to sales and trade. I work as a cook for example and Kevin our drummer is an electrician. At the end of the day we all have one main passion and that is creating metal!


Gabe: Thanks for having us! We really appreciate you taking the time to do this. Our new album Guardian of the Fire is out now streaming everywhere! Crank it!

Posted by OccultBlackMetal at 12:58 AM