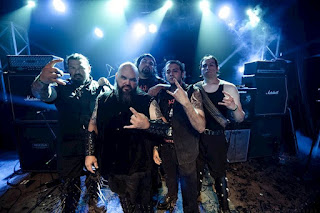 1.For those that have never heard of you before, can you tell us a little bit about the band? We are an extreme metal band hailing from South Texas with a mix of black and death metal. Pepper in some thrash and that's more or less where we're aiming. Aggressive and high energy.                        . .

2.Recently you have released your first full length, musically how does it differ from your previous ep? Well the 3 songs on the 2018 EP have been included in the full length which originally we were not intending on releasing an EP but we released it when we were coming up to doing our first show so we could have something for the fans in case they asked us for a CD, but we did some modifications & changes to the three songs from the EP adding in some leads and harmonies that we didn't have before, that would be the only differences

3.A lot of your lyrics cover satanic and blasphemous themes, can you tell us a little bit more about your interest in the dark arts?
The satanic & blasphemous nature of our lyrics are an extension of some of our members beliefs, besides what other subject matter would fit the brutal and sick music we are delivering to the masses, and we just like things that are evil as fuck

5.Can you tell us a little bit more about the artwork that is presented on the new album cover?
The artwork was done by a very talented gentleman from Indonesia by the name of Jenglot Hitam which he also did our labelmates in Panteón album artwork as well, we felt the piece perfectly portrayed the title of the album as well as the song itself

6.What are some of the best shows that the band has played so far and also how would you describe your stage performance?
We say all of them are our best cause we give it our all at every show &
Our stage performance tends to be high energy. We enjoy what we do and there is nothing more fun than getting to release our energy through our music to a crowd of like minded souls. It's a privilege to do what we do and we do not forget that.

7.Do you have any touring or show plans for the new album?
Oh yes, most definitely! We're always in talks with promoters from anywhere and everywhere! Our leader Rob Scarabeus, as we tend to call him, is always open to convos on shows/festivals, you name it. And on that note, feel free to hit us up anyone out there interested in getting our insanity to a new audience!

8.The new album was released by 'Confused Records', can you tell us a little bit more about this label?
Confused Records is our digital only distributor for our earlier & latest material. That means streaming and what not through the internet. Hard working guys over there.
Our latest album/CD (think physical copy here) is actually under the good folks at Sound of White Noise. They did a hell of a job with the pressings and we are very grateful!

9.On a worldwide level how has the reaction been to your music by fans of black and death metal?
Worldwide response has been good we had a gentleman in Poland order 20 physical copies (CD) of our new album, just received an email today from a fanzine out of Argentina called Oscuro Funeral Zine we are also waiting for confirmation to do an interview with D.O.A. magazine formerly S.O.D. magazine we have a regular rotation on England's House of Pain radio show with Jase Boy Pain very cool individual I might add

10.What is going on with some of the other bands or musical projects these days that some of the band members are a part of?
Well Rob and Fremitus Diaboli (Jaime) souls belong 110% to Unholy Desecration. We checked with a meter and everything LOL!. Necrovecula 666(Arnold) is always in countless bands from Confused to Nerve Damage. Which we highly recommend you check them out if you like intense thrash. Hideous(Josh) jams in a band called "Thy Curse" with some good friends of ours. Killer old school death metal that keeps the authenticity alive. Then our newest member, Leo Mortem has "Monuments of Sin" & his old band "Slow Grind" still pops up to throw down some high intensity death metal. This question made us realize how whorish we can be LOL! . What can we say, we love this stuff !

11.Where do you see the band heading into musically during the future ?  We have some big plans moving forward. The band's sound is set after

12.What are some of the bands or musical styles that have had an influence on your music and also what are you listening to nowadays? Listening to our material, we are sure people will pick up on the hints of Slayer, Morbid Angel, Deicide, and all the other staple bands that our kind revere. Most of us have been in "the scene" for quite some time so the influences are pretty diverse, but for the most part come from the underground communities from punk to death.

13.Before we wrap up this interview, do you have any final words or thoughts?  Well for starters, thank you very much for this interview as it is appreciated!

To our fans and future listeners we look forward to playing near you soon! Get yourself a copy of our latest album "Unholy Horde" on digital/CD (sample promos online ) and keep those horns raised high! Hails!

Posted by OccultBlackMetal at 10:50 PM