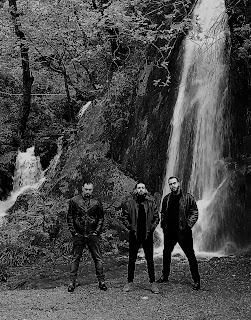 We are Actus Septem. We are a black / doom metal band from a small city in Central Greece, Lamia.
We are four members in the band. Three of the members are brothers. We started playing together in 2016.

Well we wanted to express our emotional state through our music, so we naturally composed with this in our minds. We like to export our music heavy.

3.One of your songs references Greek Mythology',can you tell us a little bit more about your interest in this topic?

You are right. Dominion Castigation is influenced by the Greek Mythology. Actually the song is about guilt and the struggle someone or everyone is carrying on deep inside. So the song referred to Orestis and his struggle against his guilts. Everyone has their guilt one way or another. Assert in Death has also a reference on the Greek History and the battle of Thermopylae.
Everyone has to guard their Thermopylae, on a moral level.

The lyrics on the EP and on songs except the EP, have an anthropocentric view. We write for what we believe; emotions that everyone has inside and tries to fight towards inner peace, redemption and freedom. Fear, sorrow, pain, culpability, loss it is what we are  mostly all of us made of.

5.What is the meaning and inspiration behind the name 'Actus Septem'?

Actus Septem means in English, Seven Actions. Seven it is of course a symbolic number all over history and in most religion dogmas. It is a spiritual number. But it is also a main number in science: biology, maths, astronomy. Every Week consists of seven days. We live our seven days and act on them. Seven are also the deadly sins that more or less exist in every person. Day seventh is the day of mankind.

Gustave Dore is the original artwoker of the cover. The artwork is about the biblical  Babel Tower where people tried to reach their God and failed. We chose this cover because it shows the will for searching the truth.

7.Has the band had any opportunities to do any live shows or open to the idea/

Until this day we decided not to do any lives until our album is released. We now have some discussions on live shows with other Greek bands.

We are searching for a label so we can publish our next work. We have some offers mainly outside Greece.

Well, luckily it's not that hard these days to promote your music through platforms like Bandcamp or YouTube. Obviously we do not have our audience yet but we received messages from in and outside Greece. Maybe black metalheads are a bit more supportive of our music than doom metalheads. Until now Brazilians are those who showed us the biggest support for sure and we are grateful to them.

In the end of July we are going to start recording our first full length album. We believe that in the middle of the Autumn we will release it.
The album will have a more black metal sound and direction.
We can't predict our future compositions. We just compose our music and who can say for the future? Surely we continue heavy.

We started by the basics, like Metallica, Black Sabbath, Iron Maiden.
Surely bands like Paradise Lost, Moonspell, Anathema, Rotting Crist and Behemoth are an inspiration .

12.Before we wrap up this interview, do you have any final words or thoughts?
Thank you for the interview and the opportunity to share our thoughts.
We want to thank all our brothers and sisters for their support.
Spread the Words; Actus Septem.

Posted by OccultBlackMetal at 11:30 AM