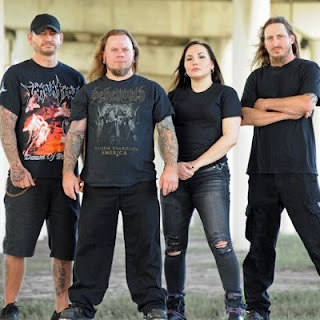 Until time of the Pandemic, We have been working on the set list for touring we were planning to do for the album. Now since everything is shut down, We have begun also working on new material and on other planned projects.

The production. We finally have a release that we really love the sound. We have been working on getting to that point for some time. Jarrett did a great job and we enjoyed working with him.

3.This is also your first full length since 1996 and with the exceptions of a few ep's being released once every few years the band has been mostly silent, can you tell us a little bit more about what has been going on during that time span?

4.The band started out with a more traditional death metal style before evolving into blackened death metal, what was the decision behind going into this musical direction?

It was a gradual process, as we started to listen to more bands coming out. We added those influences into our written style.

5.A lot of your lyrics cover satanic and occult themes, can you tell us a little bit more about your interest in the dark arts?

There’s a lot of interesting stories and tales associated with the occult. I take what I read and create my own stories from them.

6.What is the meaning and inspiration behind the name 'Insatanity'?

Mark, the original singer and creator of the band, came up with the name. He wanted something to stand out and define want his lyrics and themes were about.

It’s a representation of the ancient world, but we went with a style that would be more recognizable as ruins. The songs on the album are a collection of different eras of the bands, so we are paying homage to our past.

8.Originally the band was from Pennsylvania but now resides in Florida, what was the decision behind the move?

It was a personal decision, I got tired to the cold and snow, so I decided to move close to the beach, lol. Not much about music involved with it.

Every show play for our fans We appreciate. They keep us going, so I wouldn’t say one is better than the others. Our stage performance, We just come out and bring the aggression and groove. We enjoy bringing our music to everyone.

10.On the new album you also had done a Deicide cover, what was the decision behind doing your own version of one of their songs?

When Satan Rules His World was originally planned to be shared on our YouTube, but the final track we had planned for the album ending up having an issue. With us running tight with studio time, we decided to cut the song and include WARHW as well.

11.On a worldwide level how has the reaction been to your music by fans of black and death metal?

It has been great. We have been hearing and receiving a lot of good reviews and comments.

12.What is going on with some of the other bands or musical projects these days that some of the band members are a part of?

With the touring shut down right now unfortunately. We have been writing, mostly for Insatanity but also putting in time on other projects and those may see releases by years end or the beginning of next year.

We have some ideas planned for the next album but don’t plan to deviate to far from the way we write. We will always have new influences but are style of writing we have will still be is core.

I can really answer that for myself. Bands that inspired me from the beginning to now is pretty vast but mainly consist of Bolt Thrower, Naplam Death, Unleashed, Emperor, and Behemoth.

Everyone stay safe and thank you for all your support. Thank you for your time and this interview. We’ll see you all on the road again.

Posted by OccultBlackMetal at 12:41 AM