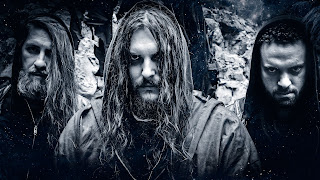 MYNSKH is an Extreme Metal Project from Europe. Rooted in Black/Death-Metal the music incorporates many different styles, ranging from classical music to Ambient. Interwoven with the music is an intricate story set in a very dark world that i created.

2.So far you have released one full length, can you tell us a little bit more about the musical style you went for on the recording?

I wrote the core material in 2013/14 while living in the south of the U.S. When i write, i dont really think until something catches my ear and my hands start repeating it. It poured out of me, song after song, and there i knew that this has to be MYNSKH. A project composed of this dark world i have imagined since years, combined with my interpretation of extreme-music.
When i came back to Europe i started working with my long-term friend and drummer, Chris Grabner on the material.
I came in contact with this viennese cellist, Matthias Bartolomey and he brought a new aspect to my music by adding an electric cello.
It worked so well that it became a main ingredient in the music of MYNSKH.

3.The band has been around since 2013 but so far have only put out one album, can you tell us a little bit more about it?

Well the recording/mixing process took a long time since there were a lot of puzzle-pieces. Learning to play the material live took us a year alone. I printed a few Demo-CDs in 2016 but i wanted to give it the release and the attention it deserves. I founded a label, made a few connections and after a lot of work we will now release the digital LP on September 18th. Physical album in January 2021. Last year we also re-recorded the bass with our new bass-player, re-mixed/re-mastered the entire thing and also made an instrumental-mix of the record. I was also putting out the last ARTAS record, which is my other band and that pretty much put MYNSKH on hold for an entire year.
Inbetween all that i started working on the second chapter and its now in the end-state of compositions/lyrics. So new music will come out sooner than anyone will expect.

4.The lyrics on the recording re a concept album, can you tell us a little bit more about the story you cover lyrically?

We follow a civilization and the eponymous city they built, breaking the laws and rules of the universe they live in. It is about reaching the very strange concept of perfection, about the downfall that comes afterwards and the return to a twisted form of primal urges. It would take too much time to go into the details, but lets put it like this:
as the story imagines such an alternate reality, it synonymously reflects upon our human existence, the development of consciousness, soul and life itself. And even if it doesnt seem so at the first glance, a lot of personal experiences and emotions are in there. Not consciously to be honest but no matter what you do artisticly, life always creeps into your art.
I also was/am sick and tired of the whole occult/satanic/reliogous-trend in this kind of music, not that i dont enjoy those topics but i think faith is something very personal. No book in the world can reflect that. No matter how old and mystic it is. I just rather see my deitis as i imagine them. So this whole story is inspired more by pessimistic philosophers, poetry, psychology and scientific-concepts, than the Devil and his mesopotamian compadres while still maintaining a mystic/spiritual undertone.

5.What is the meaning and inspiration behind the name 'Mynskh'?

It stems from a nightmare i had as a child. In this dream i saw a horrifying being, dragging its ever-changing body over an enormous, black city. The next day i woke up with the word "Minsk" in my head.
Many years later, after i started playing music in various bands, i remembered this moment and decided to call my solo-project that i was working on at that time, MYNSKH.

When i came across the picture, created by Pierre Alain Durand, my inner voices were screaming and i knew that this creation had to be the cover for the first chapter.
Its abstract, its dark, its epic. It bears questions and answears alike. Its like an archeological piece one would find in this very world i create with my music.

As i already mentioned in another Interview, i see this project more as a collective than a band. There are many musicians involved in the creation of those albums and its impossible to have them in a band together. My drummer, Chris Grabner is an integral part of the core musicians, since he is the order to my chaos, takes care of production/engineering. But since over a year now, the core of the project is extended by bassist and webmaster M.
So at its core it is a three-piece right now that lays the foundation for all kinds of live-incarnations of MYNSKH.


8.The newer version of the album is going to be released on 'Atmaah Records', can you tell us a little bit more about this label?

Atmaah Records is my label that i founded to release my music. Beside MYNSKH i also released the third record of ARTAS, "Ora et Gomorrha".
It takes care of digital/phyisical distribution and merchandise.

I dont know. Not a lot of people know about MYNSKH. We have to wait and see. Some will like it, some won´t.

10.When can we expect newer music and also where do you see the band heading into musically during the future?

Chapter II is almost finished musically and lyrically. We will start the recording this winter and it will be released winter 2021 if all goes well.
I have a very clear picture of this project. It will be a trilogy. After that its done. "Obliterating Perfection" will probably the rawest of the three, while the second album will go even more progressive paths in terms of songwriting and arrangement. I am working with some terrific musicians already. Florian Magnus Maier, also known as Morean from Dark Fortress, finished orchestrations a few weeks ago, while the amazing Safa Heraghi is working on the female vocals.
Matthias Bartolomey already layed down some heavenly dissonant e-cello tracks. The third and final chapter will be a one-hour long track, exploring the ambient/hypnotic sides of music but i cant say alot about it yet, since its still just in my head.

Too many to list them all. But the three major ones: Neurosis, Darkthrone, Mike Patton since those artists had a major impact on me.
These Days i listen to the last Septicflesh album a lot. The sound of the orchestra is just out of this world.

Thanks for the "talk" and may Tenelt swallow our souls.

Posted by OccultBlackMetal at 1:07 AM