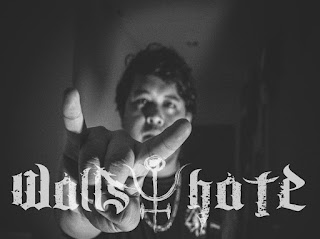 Walls of Hate for now is just a studio project. The idea to bring this project to life comes from last year (2019) when I realize that I have enough material to record and spread the music to the people. What I'm looking for with this band is to take out and compose all my own ideas without limits or restrictions. In my experience playing with other bands here in Honduras (such as Dragon Eyes, Necrofear, Ashes of Death) There are always different opinions and music influences in between the musicians when composing. It is obvious because each one of us are different and are influenced with different styles, genres, etc. To avoid restrictions, and to share with all of you my ideas, Walls of Hate will be the path for it.

I have a lot of influences and I like a lot of subgenres that metal has given us through the time. The musical idea for Walls of Hate is to always make the songs feel and sounds as dark as possible! The main genres that can be appreciated in Walls of Hate music are Black Metal, Blackened Death Metal and Death Metal. I´m always open to experiment with different sounds and styles as long as we dont
loss the essence of the original idea of the compositions, and obviously it has to sound good. For this first recording I think that I found the perfect equilibrium in between the melodies, the rhythmic riffs, background ambient, the tempo variation and the style of voices recorded.

3.What are some of the lyrical topics and subjects you have explored so far with the music?

In this debut EP, the lyrics are about Sci-fi, History and Antireligious. For further recordings I will be using a lot of the same topics written before and also themes such as mysticism, occultism, mythology and secrets-conspirations. These are themes that I personally like and would like to transform it in songs. At some point of the project, I would also like to write about Social problems, since my country is involved with injustice and corruption.

4.What is the meaning and inspiration behind the name 'Walls Of Hate'?

There is not a meaning for the name of the band. I just took it because around 4 - 5 years ago I heard that phrase in the news and I like it because it sounds good to me.

It is a really simple cover. It was created by my brother Oscar. The cover is an alchemy symbol named Antimony and represents as an ancient symbol your interior nature, your natural origin and your wild spirit. I really like the meaning of the symbol since this work represents the ideas I have in my own to be shared with all of you. Now I have to find a way to make this symbol a part of the official logo (which needed to be worked properly in the future).

6.With this project you record everything by yourself, are you open to working with other musicians or do you prefer to work solo?

Yes I record and compose all the guitars and bass, and also compose and write digitally the other instruments. For the vocals of the recording, I contact Juan Ayestas from Alien Media Prods (studio were mastering, mixing, eq and all that stuff took place), a musician and friend here in Honduras to help me since I suck in doing growls and stuff related to vocals haha. And of course, I am open to having collaborations from other musicians, especially friends, as long as their collaborations and ideas match with what I am looking for..

I am not looking for a label. Here in Honduras, the music industry in general is very weak. I have received a couple of underground metal labels emails from Europe with their info but at this time I have not paid the proper attention to this kind of stuff.

It has been great. Honestly, I didn't expect that something that I compose and write in my house here in Honduras can be heard in different parts of the world, but it is happening and it feels great. The comments and reviews have been very decent. I think people like it. I hope my music reach more and more metalheads around the world, and with the help of my friend Oleks, from Grand Sounds PR (which is doing really nice work) it is possible to happen.

9.Are you currently involved with any other bands or musical projects these days?

The main influence  of my music style is the black, death and blackened death metal genres. I catch a lot of ideas and influences by listening to bands such as Rotting Christ, Dissection, Behemoth, Maat, Diabolical, Emperor, just to mention some.

I would like to thank you for the interest in knowing details from my project. It was very kind of your part. Also want to thank my friend Oleks for sharing my material with you and other metal music lovers from all around the world. This will not be the first/last time you'll hear Walls of Hate around, I will be back soon with much more music!!! HAILSSS!

https://www.youtube.com/watch?v=t0NWiSGPZoE
Posted by OccultBlackMetal at 1:42 AM