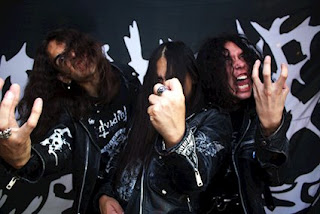 -Infesticide is Death metal in the way it always had to exist...

2.You have a new album coming out towards the end of September, musically how does it differ from the stuff you have released in the past?

-Shorter songs, definitely the main difference!
The past album songs have a very skillful structure, 30 riffs per song and a length for 5 minutes as minimum.
Envenoming Wounds its direct, a powerful with dark expression...
Musically I consider this album as the statement of our beliefs.

3.The band started out playing thrash metal but the newer music is more death metal, what was the decision behind going into this musical direction?

-Lyrics are about an infeccion I had...
got pig-blood from my local slaughterhouse for some gigs, later that night the pig blood poured onto an opened wound located at my neck.
The Next day I started feeling awful, the fever was so high that I had hallucinations... the rest you can imagine.

-Oil on canvas...it's a vision from every song name

-I don't pay attention...  We expect nothing
Death Metal outlook seems pathetic... full with HM-2 sound, Emg and low tunning... pretending sound "cavernic" just adding stupid ammounts of reverb... We prefer to not take part, If you dig our art: good! if doesn't: we don't care.

www.facebook.com/infesticide.death
Posted by OccultBlackMetal at 9:23 PM