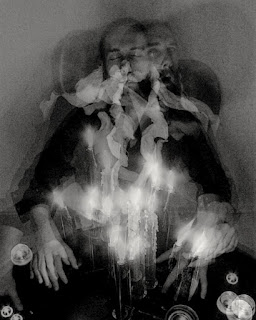 1.Can you give us an update on what has been going on with the musical project since the recording of the new ep?

Yea for sure, I've stayed busy. The recording for the EP took place in June of last year and probably wouldn't have happened at all if all my plans for last year didn't get pushed back. So besides the obvious CD layout and promotional stuff that comes with releasing new music, I've gotten back into what I was doing before I even thought to record an EP which is continue work on the next two Estuarine full lengths. I hope to keep releasing music consistently for the next couple of years and this EP is just the first part of a much larger body of work that will release over 2 to 4 releases depending on how I decide to break it up. A lot of new Estuarine is on it's way.

2.In March you had released a new ep, musically how does it differ from the stuff you have released in the past?

I've got kind of an unspoken rule about EPs where if I'm gonna release something short then there's no reason not to use the opportunity to make something that's super cohesive and just really concentrate on a certain aspect of what I like musically, so with that in mind the thinking behind this EP was short songs that are as intense as possible. That was the single thought that drove this whole EP. If you listen to my older stuff there's a lot of clean guitar sections and progressive builds mixed in with the heavy parts but for this EP I took all the ingredients and condensed them into songs around a minute long. I've done this kind of micro-song type composition since I started writing music as a teenager so it was very comfortable writing and recording this way; so much so that I may start making more short grindy EPs like this in the future.

The production for this EP was also very different. This is the first project that I tracked all the parts from home and it's also the first project to utilize a lot of new gear that I've acquired since my last full length album in 2018. I'm super happy with how this EP sounds as a first try but it's just the beginning of a much larger learning experience. The next albums are gonna sound even bigger thanks to what was learned making this.

3.The lyrics on the new ep cover the writings of H.P Lovecraft, can you tell us a little bit more about your interest in his writings?

Yep that's right, specifically a short story of his called Nyarlathotep. This was one of those weird magical things where that story just kind of fell in my lap at the perfect time and made the right impression on me so I based the EP on it. I can't remember how I first heard about Lovecraft, but it was probably through metal lyrics when I was around 8 or 9 so I've known about his writings for a good chunk of my life. As far as my interest in his writing it's pretty simple, I like monsters.. My entire life I've gravitated towards monster related shit, anything from Godzilla to Bigfoot and everything in between, so of course when I first heard a song about Cthulhu I was immediately interested and had to check out more. All that being said, I never planned on writing Lovecraft lyrics as there's plenty of other bands that already have that covered. That Nyarlathotep short story just really said something to me on the day I randomly decided to read it.

4.What are some of the other lyrical topics and subjects you have explored over the years with your music?

Pretty much anything. Every record I try to have some kind of coherence in the lyrical themes between songs but from album to album the themes stay pretty distinct. In the past I've had albums dealing with dreams, suicide, entheogens, nature, spirituality, creation and destructive living habits. Death and reincarnation are big recurring themes. I feel a shift in my lyrics as of late though where my inspirations are less about wonder and more about frustration. I'm probably just becoming more angry as a person as I get older which sucks but I know for a fact that I'm not the only one who's been feeling this way lately.

5.What is the meaning and inspiration behind the name 'Estuarine'?

Estuarine just means that something is from an estuary and I'm from Tampa, Florida so I've been around estuary habitats my whole life. I've always been proud to be from Tampa too so I picked a name that honored where I was from. This city's weird as Hell but damn it this is where I'm supposed to be, I wouldn't be who I am if I was from anywhere else.

This art was done by an artist that I'm a really big fan of, The Lung Swarm (Austin Weber). This is the only time I've used anyone else's art for one of my albums actually; in the past I always used my own paintings. He specializes in a digital surrealist style that is really eye catching and I love all his work but the reason that I picked this particular piece is because it's an actual painting done on canvas so it fits right in with the rest of my album covers. Plus the title of this painting is "Exiting Reality" which anyone familiar with the Nyarlathotep story understands how fitting that is.. And it was another one of those magical accidents where the art was offered to me at the exact right time and made the right impression. That happened a lot while making this EP..

Honestly, I don't even know what I want to do in that regard. I feel different about that every time it comes up. On one hand, I want to play live. Playing live was my first love as a musician so naturally I miss it. On the other hand, being in control of everything is addicting. Being able to to be sure the songs are exactly as I want them is gonna be hard to give up after so many years of doing this solo. I had a separate band that was playing live to fill in the gaps but shows haven't really been a thing this last year and a lot of those members have moved pretty far away so I'm not sure what's gonna happen there. We'll see what happens but I do know is that I'm not actively looking for members myself so if you think you're passionate about playing Estuarine songs you need to contact me! There are definitely a lot of amazing musicians out there that I'd love to work with.

I feel the same way as I do about finding other members.. I know there's a lot of pros and cons. I'm definitely passed the "all labels are bad" mentality that I had for a long time but at the same time I like to be in control. I might be a control freak even, who knows.. I've been contacted by a lot of labels over the years but they seem to lose interest when I start asking questions, so that tells me all I need to know in those situations. It's like I said with the band members though, if anyone out there with a label is well intentioned and legitimately interested in working with Estuarine, contact me!

It's been great! Better than I could really ask for. I didn't take any short cuts to make a ton of fans at any point in my career but with every release I got more and more support and it motivates me to keep pushing. I definitely feel appreciated and I think that fans know how much I appreciate them too. I wouldn't trade the fans I've got for anything.

10.When can we expect another full length and also where do you see yourself heading into as a musician during the future?

I think by 2022 I should have the first full length ready. It's about 85% at the moment and it's very experimental and very brutal. Like I said earlier I'm recording the next two full lengths at the same time. This first one is leaning into speed, technicality and heaviness and it mixes in a lot of non metal influences for added chaotic effect. The second is more atmospheric, progressive and melodic, also mixing in non metal influences but in a much less chaotic way. I'm very confident in the new material so I'm gonna take as much time as I need to get it right but yea, I'm thinking in about a year you'll at least be hearing some new singles starting to come out.

Yea first things first, I want it to be known that this new EP is dedicated to the memory of my good friend and former bandmate, Collin "Asmodaeus" Andrews (Led by Serpents, End Unseen), rest in power brother. Also rest in power to Satorn (Torched Ebony Skies, Nakhiel) and Lord Tartarus (Imperial Conquest) to whom my last EP was dedicated. These were all great musicians from my local scene who died way to soon, do yourself a favor and check out some of their work.

On a lighter note I also want to shout out any one who has ever supported me in any way over the years. I appreciate the shit out of you! To anyone new to the project, I've made it easy to get caught up on my back catalogue, get all my music from my bandcamp page for free (https://estuarinemetal.bandcamp.com) and if you really like what you hear tell your friends about it. Also check me out on Youtube where I do a lot of playthrough videos and debut a lot of songs (https://www.youtube.com/user/RMAIGW)).

Thanks for the interview, cheers!

Posted by OccultBlackMetal at 8:13 PM