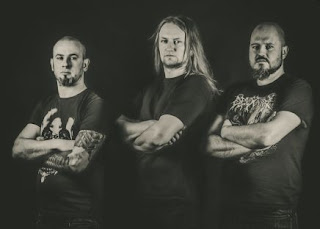 1.  Can you give us an update on what is going on with the band these days?

In March we released our debut album "RS-28". Initially only in digital version, now also available in physical CD version. We decided to release a physical copy on our own cause after all physical media is an important element of promotion, even these days. We also plan to release the LP version this fall. During rehearsals, we’re constantly working on the material already created for the “RS-28” to perform best at concerts, also dealing with new compositions. A lot is happening despite the underground nature of the band and the SARMAT is becoming more and more recognizable.

2. Recently you have released your first full length, can you tell us a little bit more about the musical style that you went for on the recording?

SARMAT is a mixture of death and black metal. Personally, I do not limit myself to listening to music only within specific subgenres of metal or even genres in general. I take music very holistically and I think diversity is crucial, but what’s on the album specifically is the music that I have always wanted to create. Death metal is the foundation here, while the elements of black metal give this music that zing which I believe is necessary in music as such, not limited to its genres or sub-genres.

3. Your lyrics cover military industry, human fears and obsessions, can you tell us a little bit more about what these topics mean to you?

Yeah, the general concept of the lyrics on the debut album can be assigned to the themes mentioned in the question and I would add to this "human factor", as on of the most important ones.

By taking a closer look at the specific lyrics, you can find stories about individuals taking over the minds of crowds to pursue their own morbid ambitions in the events that happened in the past, are happening in the present and might even happen in the future. There’s also the motive of duplicitous evil and its evolution as a process of changes taking place over time. Sometimes faster, other times slower. Even so, the end is usually unpredictable. The title track says that people live in the embrace of the destroyer - in a place that is a ticking time bomb and our time in that place is inexorably drawing to an end.  Another part of the album speaks of the unknown “journey to eternity”. We tend to look for such sensation, abandoning the material world around us, balancing on the oneiric edge of reality. But there are also lyrics that deal with the rejection of life's compelling restrictions and it’s our praise of freedom. The final conclusion is, among other things, to draw attention to the uncertainties of global security procedures and the overwhelming consequences that may occur as a result of these in a near future.

The variety of issues raised in the album is intentional and all of them have common elements that make up the final message of the album. The lyrics were mainly written in 2018-2019, although some ideas have their origins even in 2015-2017. Their creator is one of our friends who writes under the pseudonym "H".

4. I know that the band was named after the Russian 'Weapon Of Ultimate Destruction', how does this name fit in with the musical style that you play?

I think that the answer to the above question becomes obvious after listening to our debut. SARMAT is RS-28, Weapon of Ultimate Destruction. After all, the music layer of the album is 34 minutes of ultimate destruction. The earlier mentioned lyrics also strongly refer to this instrument of destruction, both literally and metaphorically.

The cover of the album, despite its seemingly simple form, carries a lot of symbolism and it should be interpreted metaphorically. As I mentioned before, we live in the embrace of the destroyer in a place that is a ticking time bomb, our time in this place is inevitably drawing to an end. Children, as a symbol of innocent victims of the abovementioned destroyer, but also the last ray of hope. Hope that remains in even the worst case scenarios. There is more to this symbolism. The cover shows an atomic mushroom with a human skull which refers to dropping the destroyer on humanity. Barbed wire, on the one hand, as a symbol of prohibition used by the "masters of chaos" from one of the lyrics of the song, and on the other hand, as life limitations that must be broken. However, we do not want to impose an interpretation, only direct it. It all depends on how you look at it.

6. Do you have any live shows planned once the pandemic is under more control?

If the pandemic situation allows us to do so, we are of course planning live shows however, this is not the only condition. We are organizing a concert line-up for SARMAT because at the moment we do not have even one permanent drummer nor bassist, but the situation is developing. We want the best concert conditions for our debut album performance. Initially, there are plans for September, but taking into account the earlier mentioned circumstances, I will not give specific details. Contact with the audience is a very important link for the band and the audience. Considering the large dose of energy that emanates from our material, we are definitely moving towards recreating these sounds in concert environment.

7. The band managed to release physical copies of the album without a label, do you prefer this format over the more modern digital format?

Due to the times we live in, we decided to release the album first in a digital version, and then after unsuccessful cooperation with the label, we released the CD version ourselves. Obviously, each form has its advantages. I personally like the physical medium. It gives a feeling of more contact with what the artist has to convey. Printed texts and general information about the recordings are relevant to any listener. And that unique smell, especially straight from the printing house. It's always something different and amazing, and that's what the digital version lacks. However, the digital version can reach much larger audience. Anyone interested in the album can familiarize themselves with it. As I mentioned earlier, we are also planning the LP version – this form of publishing is currently doing quite well on the market. But that is a distant future for now.

8 .On a worldwide level how has the reaction been to your music by fans of black and death metal?

The worldwide reaction in this short time since the album release we consider as good, sometimes even great. Local Polish critics point out various aspects of the album from which we draw conclusions. Worldwide media rate our debut as "good" or "very good", with the advantage of the latter. We read these reviews. We are, of course, aware that the music we play is quite niche, which is not aimed at the general public so certainly. If someone does not listen to such music - it won’t be for them.

9 .All of the band members also have experience playing in other bands, what is it that you bring into the music of SARMAT, that you were not able to do with your other groups?

That’s true, we are not new to the scene and each of us has worked with different bands in the past. That experience comes in handy under the SARMAT banner. Personally, I started making riffs few years ago and that was something fresh. I didn't know what would come of it at the time. Soon after, I started working with a second guitarist and it turned out well. Together, we framed ideas for specific songs. Then our friend, who writes under the pseudonym "H", prepared the lyrical layer for our early recordings. It all took the form of something new that we just never experienced in our previous music projects. Hence the decision to establish a new band - SARMAT. And here we are.

I think that the core of our music will remain similar in the future, but I definitely do not exclude its expansion into new musical themes. It is the creative spirit that will determine the direction in which SARMAT will move musically in the future. We already have a few specific ideas that, from the musical and lyrical side, discover new themes. Nevertheless, we do remember our roots, which will undoubtedly appear in our work in the future. Will all this make the SARMAT recognizable at the metal scene? Time might give the answer here, but I am definitely optimistic about the future.

11. What are you currently listening to nowadays?

I can say that my musical interests go beyond death and black metal. I think that this broadens the horizons and allows a much deeper look at the creation of music, as well as the music in general.

First of all, I would like to thank you for the opportunity to present SARMAT band on your pages. I would also like to thank those who support us, from people who helped us prepare our debut album, those who bought it, to those who write about it. I also invite undecided to give a chance and listen to our album. Feel free to contact us. Hope to see you at gigs in the future!

Bandcamp
Posted by OccultBlackMetal at 2:05 PM