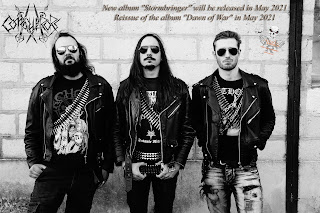 Not that much to be honest ahah. Since Covid is still an issue, gigs are still not a reliable thing, but we’re working to get some events as soon as possible to promote the new album. Also, we’re keeping the rehearsals, and beginning to write some stuff for the next album.

Stormbringer is a bit more “thrashy” than the previous ones I guess. We’ve simplified the structure of the song to highlight some riffs, and kept a tempo way more high throughout the album. The production is less “harsh” too, a bit more professional but still the 80’s way. Stormbringer is just the step 2 of what we have begun on Dawn Of War : less riffs, shortest songs, highest tempo and aggressiveness .

3.You also re-issued your 2019 album around the same time of the new release, what was the decision behind releasing a newer version?

We were not satisfied by the first release. It was recorded in a garage, without really checking and adjusting all the instruments for the recording. Also, we changed the line-up like 2 month before the recording : Anfauglith had to switch from bass to drum and learn the parts quite quickly. Eventually, we judged that this try was a bit too rushed and not bringing justice to the songs we created, so we decided to record it again with a better production and mastered parts.

4.From 2015 to 2019 there was no music being released, can you tell us a little bit more about what was going on during that time frame?

Those years were focused on only doing gigs once in a while and slowly writing new stuffs. The line up was a bit unstable, which didn’t help ahah. Ottar left the band, so we had no bassist, Anfauglith joined in 2018 to replace him, but shortly after the previous drummer left, so Anfauglith went on drums, and Ottar finally came back. Also, we are wankers in a way, so time fled way quickly ahah

5.What are some of the lyrical topics and subjects the band explores with the newer music?

Still the same old shit : war, death, destruction, battlefield and violence. It didn’t change that much from the previous release, since we don’t really give a fuck about lyrics : Morty write them generally the day before the recording, since we are not here to give a deep meaningful message through the lyrics.

Well nothing much to tell too ahah. This artwork was done by Kinglizard, a friend of ours, and represents the same skeleton shown on Dawn Of War. No specifical story, just as long as Stormbringer was the direct continuity to Dawn Of War, it has to be on the cover too, end of the story.

We had several good shows, but I think the one at MCP Apache in Belgium was one of the best. We shared the stage with Slaughter Messiah and Hexecutor, there was a nice affluence, public reception and good stage conditions. Our stage performance are mainly based on energy and aggressivity. We give everything we have in our guts while performing, which means playing faster, louder and more violently than the rehearsal. A good gig is when we are exhausted at the end, with blood on our hands ahah . It may not be as tight all the time (fuck the metronom on stage condition), but it strikes to be authentic and just real energy. Usually, the public feel it and give us back nicely.

8.The new album was released on Music-Records, how did you get in contact with this label?

We simply searched some labels on our side of the country, and they were one of the few who responded to us, so let’s go

9.On a worldwide level how has the reaction been to your music by fans of black and thrash metal? Generally quite positive : even though the records, they can feel the burning energy of our playing, and they’re pleased to listen something similar to the old school bands. The perpetual fast mayhem displayed is also something they really like. On the others hands, you have some whiners who want to see us do a more “intelligent” et “innovant” Black Thrash, to step away from all they already heard, but I assume that they didn’t understand what’s the purpose of Conquerors ahah

We will keep the style we took on Dawn Of War and Stormbringer, trying to stick to this Brutal Black Thrash we like so much. Of course we will works on some negative points that came out, but next album shouldn’t be very far from the last one. No surprise.

The same good old stuff. We’re not very into the new way metal is taking and stick to what forged us as metal fan and musicians. Just look at our T-shirt and you’ll get a clue ahah

Thanks for your work and your will to keep the underground real ! Also, for the listeners if you like our stuff, buy it fuckers, and if you don’t, piss off

Posted by OccultBlackMetal at 7:53 PM