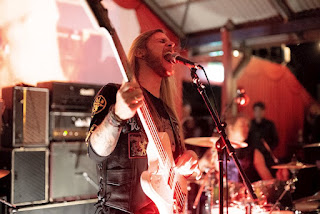 - We’ve been doing lots of promotion for the new album, trying to get it out into the world. The day of the launch we did a headlining gig in our hometown with some mates in other bands. We’re still planning a few more interstate shows for next year but this Covid bullshit is making things difficult.

- For me the biggest differences are the songwriting and the production. I feel like the songs are better written here (stronger riffs and sleeker song structures) compared to our first release. We also decided to bring in a seasoned producer (Troy McCosker) this time  whereas our first album was self recorded. The drums, bass and guitars sound amazing and the performances are far better/tighter.

3.The band also uses a bass guitar as a lead instrument, would you be open to using a regular guitar on future releases?

- The biggest reason I use bass as a lead instrument is that I’m absolutely shithouse at playing guitar. I think if we ever used regular guitars it would change the sound and dynamics of the band to a point where it wouldn’t sound like Hell Machine anymore.

4.Both of the band members are also in other bands, what is it that you bring into the music of 'Hell Machine' that you are not able to do with your other groups?

Both of our other bands have been fairly inactive for a while so Hell Machine allows us to continue to write and perform music in a live setting.

5.Some of your lyrics cover occult themes, can you tell us a little bit more about your interest in this topic?

I loathe every religion (especially Christianity) so I’ve always been drawn to Satanic and anti-religious themes. Being a life-long metal head I’m also into the darker and more extreme elements of life, some of which people consider taboo.

6.What are some of the other lyrical topics and subjects the band has explored so far with the music?

Hatred and anger are a pretty central themes in most our songs. I’ve written a few songs about people I hate (‘Lowlife’ for example). We also touch on topics such a overpopulation, depression and mental illness on the new album.

7.What is the meaning and inspiration behind the name 'Hell Machine'?

I took the name from a ‘Devil Lee Rot’ song because I felt like it really embodied what I wanted to portray in the band. It conjures up the image of fierce, fast and evil music.

8.Can you tell us a little bit more about the artwork that is presented on the new album cover?

The inspiration for the cover comes directly from the lyrics of the album closer ‘Hammer of Hate’. It’s about a beast sent by Satan to our world to annihilate all of mankind.

The artwork was done by SAWBLADE (Daniel Shaw) from the Housten, Texas. He’s worked with bands such as Toxic Holocaust, Insect Warfare and Municipal Waste. I’m a huge fan of his work and was absolutely stoked when he agreed to take on the project. He’s done an amazing job with the cover and we couldn’t be happier.

9.The band started out as a solo project but has expanded into a duo, what was the decision behind adding in another member?

I started Hell Machine because all of the bands I was in at the time had become inactive and I missed playing gigs. I wrote and recorded our first demo myself, but the intention was always to become a live act. I got Mal onboard because he’s a great drummer, super experienced at playing live and and absolute weapon at setting up shows.

10.What are some of the best shows that the band has played so far and also how would you describe your stage performance?

‘Hell On The Bay’ 2018 was pretty special. It’s a ‘heavy metal cruise’ where the bands and punters get on this tiny boat and sail around Melbourne for the night while drinking and playing metal. It’s such a unique experience and we had a blast playing it.

Our stage show is fast and energetic, with lots of onstage head banging and us hanging shit on religion and other things we hate between songs.

11.The new album was self released but the band has worked with a label in the past, are you open to working with another label again in the future?

We’re definitely open to working with another label in the future if the label aligns with our goals and ideas.

12.On a worldwide level how has the reaction been to your music by fans of black and thrash metal?

In the past most of our recognition has been in our home country. We’ve begun getting some international attention with this release so that’s pretty exciting. A few merch orders have been going overseas which blows my mind and I’m really looking forward to see what the rest of the work thinks of Hell Machine.

13.What is going on with some of the other bands or musical projects these days that some of the band members are a part of?

I’ve been slowly working on a death/grind side project with my brother (who I used to play in a band with).

14.Where do you see the band heading into musically during the future?

I’d like to push the boundaries of our music and experiment with longer and more complex arrangements while still sticking to our core beliefs of Thrash and Satan.

15.What are some of the bands or musical styles that have had an influence on your music and also what are you listening to nowadays?

I’ve personally been listening to a lot of newer bands these days like Toxic Holocaust, Midnight, All Hell, Hexecutor, Deathhammer, Bunker 66, too many awesome bands to name.

16.Before we wrap up- this interview, do you have any final words or thoughts?

Thanks for your interest in Hell Machine. I hope you and your readers enjoy the new album. You can purchase and stream the entire album at: https://hellmachine.bandcamp.com/album/relentless-aggression

Posted by OccultBlackMetal at 6:31 PM