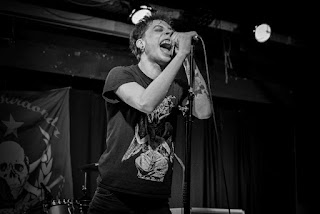 Hi everyone. Our second album “Adamo” will be released soon on Carlo altobelli’s slaughter house record. So far we have published two songs and they seem to be appreciated. We are looking forward to play live soon.

with “Adamo” we really tried to bring together our inspirations from grindcore, black metal, hardcore, crust in a really powerfull and meaningfull way.

We are slow, simple as that. We took our time to give to every song its own meaning.

And also... covid, have you ever heard of that?

Discomfort, frustration, alienation, hatred, inability to communicate… you know, a classic. We describe those feelings that everyone experiences but nobody is willing to admit.

Everytime we choose a different point of view: “Uno-“ was about conscience, “Triratna” about the misery of  the human being, in “Adamo” we do that through mythology.

5.On one of your older releases you covered 'Oriental Philosophy', can you tell us a little bit more about your interest in this topic?

Triratna stands for “three jewels”: the enlighetened, the teachings and the community.

We took this idea to talk about the unity and division of man: the body, the mind, and the soul.

If we are interested in a concept, we follow its path to explore more themes in our lyrics.

6.You have also made a reference to Tiamat in one of your song titles, do you also have an interest in mythology?

We like mythology because, as religion does as well, exerts immediately a sacred atmosphere, even from the most dull matter, like... man.

Adamo is all about this, using the myth to talk about misery.

7.What is the meaning and inspiration behind the name 'Rejekts'?

Once upon a time… in 2006 we were young and stupid, we needed a name for a crust/grind band à la yacopsae. Someone proposed “rejects of society” like the crass song. Too long, what about “rejects”? too simple! Make it cooler with a K! There you have rejekts. Time has passed but the name is still there, so we are.

8.Can you tell us a little bit more about the artwork that is presented on the new album cover?

The artwork was designed by raffaele salzillo, we have been working together for a long time. The main themes are sacred/unsacred, human/divine, perfection/imperfection.

The figure shows both flesh and holyness, embodied on the same level.

We have been playing for quite a while, we have shared the show with a lot of band, some of them: Cripple Bastards, The Secret, Implore (Germany), STORM{O}, Dehuman (Belgium), Hierophant, Øjne, selvə, Hate & Merda, Discomostro (ex Skruigners), The Seeker.

Live performance is very importante for us and we are working on a more evocative way to stand on the stage: low light, no talking. Dark like our lyrics.

10.On a worldwide level how has the reaction been to your music by fans of black metal, grindcore and crust?

We started from punk HC and crust scene, but we have always been too punk for blacksters and too blackster for punks… we have find our place in the blackeden hardcore wave like The Secret, Celeste, Hexis…

`11.Are any of the band members currently involved with any other bands or musical projects these days?

Our roots are black metal, grindcore and crust, but we like to experiment a lot and open to new influences.

We listen to a lot of different genres and artist, everyone of us has its own taste in music. About our style i can say italina hc from the 80’ Nerorgasmo, Wretched, Negazione, Declino, Indigesti and classic balck and grind Napalm Death, Brutal Truth, Carcass, Terrorizer, Mayhem, Gorgoroth, Darkthrone. Talking about “blackened” The Secret, Celeste, Hexis, Implore, Calligram, Full Of Hell, This Gift is a Curse, O, Rorcal

Thank you very much for the interview, we hope you will enjoy our new album and we are looking forward to play it on tour and hopefully see you there. Ciao!