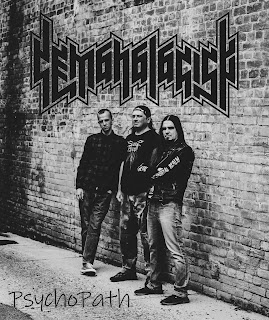 1 – For those that have never heard of you before, can you tell us a little bit about the band? DEMONOLOGIST is Ukrainian band, which was formed in 2017 as a blackened thrash metal formation by vocalist Alex Sidorenko (ex-White Ward, ex-Suicide Nation) and guitarist Konstantin Ratnikov (Deathincarnation, ex-Blasphemer, ex-Hard Way). For some time we accumulated material for EP ‘Nascentes Morimur’ and then Vyacheslav Slavinsky joined us as the bass player. For some time we played as a trio with session drummers. This summer we were signed on an Austrian label Kvlt und Kaos Productions and on 31.10.2021 released our full-length album ‘I Curse, I Dance’. Also, just a month ago we started playing with Serhii Bilyk and now I am proud to present him as our drummer on a regular basis.
2 – Recently the band has released their first full length, can you tell us a little bit more about the musical style that you went for on the recording?
Conceptually, we perform music which doesn’t have pretentiously serious or philosophical context in its core. Black humor, ironic display of metal cliché – that is our main course. So when I was preparing for forming DEMONOLOGIST, I considered blackened thrash metal as a perfect platform for this. Evil fun, full of drive and malice – that was the idea for the project. In other words, all the fun, humor and sarcasm, achieved with the Thrash Metal, had to be covered with malice, poison and evil vibes of Black Metal. That was our goal and I think we reached it.
3 – What are some of the lyrical topics and subjects the band has explored with the music so far?
All the songs featured on ‘I Curse, I Dance’ are sketches on different subjects, with various themes but all filled with venomous mockery and sardonic humor. For example, ‘Be My Guest’ describes everyday routine in torment chambers, ‘High On Evil’, ‘Tekeli-Li’, ‘R’Lyeh’ show metal cliché and myths of H. P. Lovecraft in exaggerated and sarcastic way. The title track ‘I Curse, I Dance’ is a look at the modern warfare, but with voodoo rituals as a common armament. And so on – classic horror scenes (“Gastronomikon”), archetypical misanthropy an anti-humanity, ascended to a ludicrous degree (“Psycho Path”, “Extra Malice”, “Bilespitter”), etc.
4 – With the name ‘Demonologist’ do any of the band members have an interest in occultism or demonology?
No. The name of the band, letters in logo, stylized as 666 and some occult themes in lyrics are a tribute to metal culture, they serve as means of our artistic expression.
5 – Can you tell us a little bit more about the artwork that is presented on the new album cover?
It is the direct reflection of our music in a visual form. The artwork means exactly what it depicts – imps (or demons, or familiars) having their fun in flaming hell! Rocking and Rolling to their fullest.
6 – Has the band done any live shows or open to the idea?
Of course! This kind of music lives for it. We have done several live shows in Ukraine in recent years and are preparing for more intense live schedule in the nearest future. The first one will be on 29.01.2022 in Lviv, Ukraine at the picturesque club Ruin Bar. After that, more shows are to come.
7 – The album was released on ‘Kvlt und Kaos Productions’, how did you get in contact with this label?
After recording, engineering and mastering the album, we began searching for a proper home label, using the database of different online resources. I have sent our material to the labels which I thought could be interested in our kind of metal. Kvlt und Kaos Productions has appeared to be the most suitable brand for us. Christoph is great, he really cares about performers signed on his label. We are grateful for what he does and deeply respect his dedication to underground metal scene. 8 – On a worldwide level how has the reaction been to your music by fans of black and thrash metal? All the feedback was very positive by far. Also, songs from ‘I Curse, I Dance’ were featured (and still are) on various radio programs and metal podcasts.
9 – What is going on with some of the other bands or musical projects these days that some of the band members are a part of? Our guitarist Konstantin runs DEATHINCARNATION (death/black metal) since 2006. Recently they released their fourth album ‘Dysfunctional Divine’ on More Hate Productions. As for the others, DEMONOLOGIST for now is their only band.
10 – Where do you see the band heading into musically during the future?
We will continue to develop and deepen our own vision of Hellish Rock’n’Roll by means of thrash/black metal. Our next album is already in progress, with some interesting conceptual ideas within it.
11 – What are some of the bands or musical styles that have had influence on your music and also what are you listening to nowadays? DEMONOLOGIST was heavily influenced by SODOM, TOXIC HOLOCAUST and MOTORHEAD, as well as all the first black metal wave (or so-called ‘proto black metal’). As for what I’m listening to – it is mostly 90’s and 00s death metal. I love different music, from synthwave and heavy metal to black and brutal death metal. And these days I headbang to DEEDS OF FLESH, BLOOD RED THRONE, GORGUTS, OBITUARY.
12 – Before we wrap up this interview, do you have any final words or thoughts?
Thank you for your interest in our music! From beauteous Ukraine, we hail to all metalheads worldwide! Be true to your convictions, stand on your own, stay metal!
Website: https://www.kvltundkaosproductions.com/demonologist
Bandcamp: https://kvltundkaosproductions.bandcamp.com/
Facebook: https://www.facebook.com/DemonologistOfficial
Youtube: https://www.youtube.com/channel/UCnFSO329HQE19VtMX0DhEsg
Spotify: https://open.spotify.com/artist/15hOrbYg7a9WhTStH7rm1R?si=uUfuD7kVTdiFI7BvyAQJJQ&dl_branch=1&nd=1
Instagram: https://www.instagram.com/demonologist_metalband/
Soundcloud: https://soundcloud.com/demonologist_metalband
Posted by OccultBlackMetal at 6:14 PM