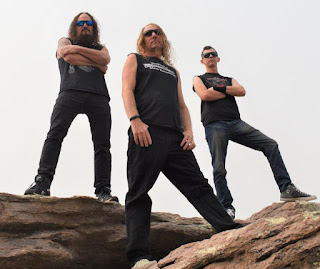 1. Can you give us an update on what is going on with the band these days?

Steve: We played our first show in Mexico this past November, that was a great experience, the fans there are very supportive of metal and they treated us like family. That was our last show for 2022, we are taking the remainder of the year off to concentrate on releasing our new album, which you can read more about below. 2023 is shaping up to  be our most active year as a band, things are really looking up for us right now.

2. So far you have released an EP, can you tell us a little bit more about the musical style you went for on the recording?

Steve: We weren’t shooting for a specific style when we entered the studio, we just went in and did what we do live, and it worked out pretty well. Even though the EP was recorded in 2-days, we didn’t feel rushed, the overall sound is huge, we are really happy with the way it came out.

3. You refer to your music as being 'dark metal', musically how do you feel you differ from other bands that have also used that term to describe your music?

Trek: We used "Dark Metal" to describe ourselves early on, because we felt we had elements of black metal & death metal in our music....but we really didn't truly fit into either genre. Our music has deep roots in 80's thrash, a hint of death metal and black metal vocals. Out of all the metal subgenres today I think we best fit into the "Blackened Thrash" category.

4. What are some of the lyrical topics and subjects the band has explored so far with the music?

Steve: The lyrics are dark in nature and touch on many different topics, anti-christianity, death, reincarnation, serial killers, alien abduction, and more.

5. Can you tell us a little bit more about the artwork that is presented on the EP cover?

Steve: We wanted something that would portray the bleakness of the title track “What Darkness Brings” the complete loneliness and finality of dying, in the end we all go alone.

6. Do any of the band members have experience playing in other bands?

Trek: Before moving to AZ I played all over the Bay Area with a hardcore band called Troublemaker and played on their 1st album "Fist Impression". When I was living in So Cal I played & recorded with the power metal band Stealth, and toured with Tactics, before that too many garage bands to mention.

7. Out of all the shows the band has played so far, which one stands out the most?

Steve: Opening for Soulfly was terrific, they weren’t touring with any other bands so we had the direct support slot. We had a lot of family and friends at the show, with quite a few of them coming from out of town. As old Sepultura fans, it was a proud moment to share the stage with Max Cavalera.

Trek: We're working on another trip south of the border into Mexico, and a couple cross country mini-tours to play festivals in New Jersey and Tennessee.

9. Currently you are unsigned, are you looking for a label or have received any interest?

Trek: In today's DIY industry so much can be done independently we haven't actively searched for a label. We feel we're at the point where we would consider the right offer and with the response and help we've got from you and others, believe that our upcoming 2023 release will generate label interest.

10. On a worldwide level how has the reaction been to your music by fans of black, death and thrash metal?

Steve: The reaction has been really good, our EP is starting to get played all over the world, it’s gradually picking up momentum, and the reviews have been great. We are starting to see more action overseas, it is exciting to reach our brothers and sisters from foreign shores.

11. When can we expect a full length and also where do you see the band heading into musically during the future?

Steve: We went back to Homewrecker studios and have recorded a 10-song full-length album, which is currently in the mastering phase, this time we chose Audioseige to master the album. It will be released in early 2023, we will be releasing singles and videos soon. Having said that, we have already started working on songs for the followup album, no rest for the wicked, right.

12. What are some of the bands or musical styles the band members are currently listening to nowadays?

Trek: Uada, Unto Others

Steve: I’ve been listening to a lot Black Metal, which isn’t new for me. There are so many killer bands out there, from every country. I discovered Kvaen for the first time earlier this year while I was searching for an artist to do our upcoming album cover. The artwork on their latest release, “The Great Below” caught my eye. It's a fantastic album, from start to finish. Ninkharsag “The Dread March of Solemn Gods” has been on my playlist, as well as the newest Dark Funeral, whom I was able to see a few weeks ago live. I went on a thrash binge the other day, Nuclear Assault, Midas Touch, Forbidden, Sacrifice, Infernal Majesty, to name a few. As I write this I am listening to Lord Belial “Rapture”...which kills I might add.

13. Before we wrap up this interview, do you have any final words or thoughts?

Trek: Many thanks to you for this opportunity to share a little more insight into our world, we can't do this without our fans and people like you who support the unsigned up and coming metal bands like us!