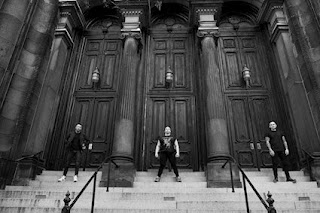 At this point in time the group consists of three members, until we fit a bassist. It started with myself and joe, crafting ideas of a new project. We began writing material which led to 4 complete songs, musically. After further thought, we decided we wanted to head in an different direction from the material we had in hand at that time, and eventually left those 4 tracks behind, to revamp things. Later into that revamp, john joined the group on second guitar. The revamp then yielded the 3 tracks heard on this demo.

2.So far you have released an ep, can you tell us a little bit more about the musical style you went for on the recording?
The material certainly has its thrash backbone. Amongst it however, are aspects of others styles pulling out a darker overall element to the music. I suppose the material in these 3 songs exhibit emphasis on precision in the writing, and we translated that over when working with steve in the studio, while recording the songs. We had a great experience working with Steve Roche at permanent hearing damage, as it was a first time working with Steve for any of us. Nothing but respect for Steve, both personally, and in his way work.

The lyrical content within these demo songs is pretty interpretable. Much of the content deals within a dark nature, to suffocate the light.

.What is the meaning and inspiration behind the name 'Crush The Altar'?

I think each of us could answer that in our own way. To take a vague approach rather then an in depth and prolonged rationale... To me, the word ‘altar’ represents everything I despise. Everything harmful to the progression of man, and his surroundings. The crushing of these things is to be understood as the definite end of such.

.Can you tell us a little bit more about the artwork that is presented on the ep cover?

The artwork was done by Muhammah Candra. The artwork describes a profound commitment to the things that mask or cloud our progression, even in the darkest of times. When facing the end, believing there is haven, when the end is imminent.

Crush the Altar has not played out yet. We are not a studio only band by any means, and we will get there. We are in the process of fitting a bassist meanwhile, as stated above.

7.Do you have any touring or show plans for the future?

Not at the moment.

8.Redefining Darkness are release the physical version of the ep, how did you get in contact with this label?

Via email. I became aware of Redefining Darkness due to their presence on social media.

9.On a worldwide level how has the reaction been to your music by fans of black, death and thrash metal?

So far, so good. We appreciate the reviews on the demo thus far.

Time will tell with the follow up release. We are in the process of writing.

12.Does Satanism or Occultism play any role in your music?

Neither play a role in our music. Our content does deal with ‘religion’ but at no point is inspired by satanism.

Thank you Thomas for releasing this demo. Thank you to our friends.

Posted by OccultBlackMetal at 9:25 PM