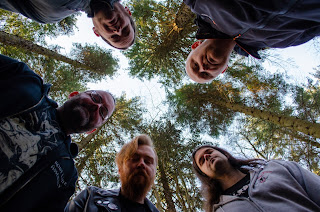 Scott - I have been working with some riff ideas for the next release. It's going to be a while until they take shape as songs. No rush

2.Recently you have released a new album, musically how does it differ from your previous ep?

James - The album is just a more mature and better-thought step on from the EP. As that EP was a first offering, it felt like we were finding our feet and first developing an understanding of what direction we were looking at. The album has cemented it a bit further and as a result has allowed things to be busier (e.g. substantial amounts of layering) as we knew better what we were trying to do.

3.What where some of the lyrical topics and subjects you explored on the album?

Craig -It's a mix - Anti-fascism, Cyclops mythology, kraken and a COVID ish end of the world theme for Contagion

5.What is the meaning and inspiration behind the name 'Cyclops Cataract'?

James - I love it because it is a common affliction only made so much worse by circumstance.

Scott - I like the play on words. It's a tongue in cheek name. Hopefully it's memorable.

The artwork was by an artist called Waking Sky of Tree. I found the artist on Deviantart and thought the work perfectly reflected our music. The images are have quite a dark theme that also incorporate a lonely appearence. The character who appears in the artwork has a stag head. This was perfect as we have have plenty of deer in Scotland. It was a very lucky find and I was delighted when the artist agreed to let us use some of the imagery. I'm a photographer so the visual side is important to me.

7.Once the pandemic gets more under control, are there any plans for live shows?

James - I am looking forward to the idea of performing this stuff live. There is a great energy to it even if stripped right back. Of course we’d want to be able to deliver the full experience, but with the constraints of band members it’ll require a good bit of practice to work out how best to recreate the tracks.

Mark - Absolutely, once the situation with playing gigs post-pandemic is more clear and when we’re confident that playing live will be able to match the standard we have set with the album.

8.The new album was released on 'Planet K Records', can you tell us a little bit more about this label?

Scott - We signed with Planet K Records recently. You can tell that they're just as passionate as we are about heavy music. Although they're based in Italy and we're in Scotland, the contact has been great. They have been really promoting our music and we greatly appreciate that. We hope to continue this relationship.

Scott - The reaction has been great. I'm really proud of a recent review that compared us to Imperial Triumphant. Although we don't really have jazz elements, we certainly don't try to adhere to typical song structure ideas and it's been great that this approach hasn't been lost on people. Although we're abstract, we do have a vision.

James - I’d like it to stay relatively close to what ‘The Bestiary’ does for a little while I think – it seems somewhat unique with the blend of brutal and ambience and the way it goes together.

Scott - Yes, I agree with James. Certainly my rough ideas for the next one indicates another abstract adventure.

James - Lots of Sylosis of late, more-so than any other band for the last while actually. Also always the staple diet of Metallica, Slayer, Pantera. Arch Enemy, The Agonist, Infected Rain and Jinjer have been relatively frequent as well come to think of it!

Posted by OccultBlackMetal at 7:10 PM