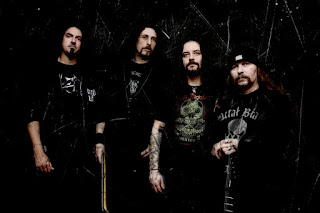 The recordings of the EP actually started almost two years before the release of it. We all had a lot of other obligations to fulfill at the time and we felt that we lost a bit of momentum after a while.

Thankfully we got the opportunity to appear on some compilations and we released a lyric video for the track ”Castaway” (1) as well. As we were heading out on a smaller european tour we got it all together and DOMINO saw the light of day.

Right after the tour the world closed due to the pandemic and in december we released a song dedicated to the year 2020 called MMXX - Where is your God?

We recorded a video for it directed by talented Wille Hummelgard Kyrk (2) and it has been doing fine so far.

2.A year ago you had released a new ep, musically how does it differ from the stuff you have released in the past?

Not that much actually.

We may have moved more into the area of our first release ”At Ease With the Beast” but we still keep the rhythmic, melodic, yet aggressive, arrangements in our songs. Lyrical-wise, we deal with the same stuff we always do. Upgraded. Of course.

3.This was also your first release in 13 years, can you tell us a little bit more about the long wait in between releases?

This has been an extremely long wait! We have become Manowar!

We are really sorry about this happening but there are reasons.

After the release of ”Inde Deus Abest” we toured around a lot and ultimately singer Mouth and bassist Engine were recruited to another band that also recorded an album and toured across Europe (3).

NATTAS recorded an EP as a proof to the audience that we were still alive, but there the band started to fall apart and the EP never was released. We use to refer to it as ”The lost tapes”. Good shit actually!

We recruited new talented guys, The Steel (famous Swedish death Metal-legend (4) ) on drums, and Wead, The adaptive Satanist (famous Swedish guitar-legend (5) ) on guitar to keep the NATTAS-train moving and did some hard-hitting gigs to follow.

To top it off one of the guys died. And was resurrected. Heart failure. A month in a coma, a whole lot of grief, anxiety and confusion made us hit the break for a while but brothers work together and we are still here.

Mainly our lyrical topics are… ethics, moral. What's your point of view regarding this subject? People claim we are satanic, and in some way… Not gonna argue.

5.I know that the bands name spells 'SATTAN', do you have any interest in Satanism or Occultism?

Definitely. The whole idea of satanism as a moral compass speaks to us. You are the one that decides what happens. You are the master of your own fate.

6.Can you tell us a little bit more about the artwork that is presented on the new ep cover?

The cover is created by Moonring Design. Their ideas and concept matched very well with our thoughts for the EP. It is dark, suggestive and somewhat worrying. Fits like a glove, right?

NATTAS is a great live act! We take pride in doing our best to make the audience feel that the fee to enter the venue was worth it.

We have done so many gigs by now, and so many has been good that it is hard to point out just a few, but…

Our gigs at Anchor, Stockholm also tend to be good. And Gota Kallare. And Copperfields. And…

8.The new ep was reelased on N666 Records, can you tell us a little bit more about this label?

DOMINO was released by N666 records. Small label, but nice. We are extremely open to work with a bigger label again since we only have one more obligation left on N666.

Later this year we are supposed to release a live album as a reminder to what things were like when the world was functioning.

9.On a worldwide level how has the reaction been to your newer music by fans of black and thrash metal?

I have absolutely no idea!

We were one of the last bands to tour 2020 and we had a great time on the road, but after that…

DOMINO never got the chance it deserved to be a part of music history since the world closed, and we feel we could have been more recognized for it if the touring could have continued over the year, but…

Being realistic it is not the best record released in 2020, but it is a proof of life, a party on a CD, a reason to have a beer. We are needed that way.

As mentioned before, a live album is on the way. A new full-lengther is planned for 2022. Hopefully we can find a label eager to promote it.

We are definitely going to continue being a voice of reason in the maelstrom of extreme bands. Our plans are set on continuing to release songs that are easy-accessible , educating and maybe as provoking as possible.

In my opinion Anaal Nathrak released the best song of last year in ”The Age of Starlight Ends”, but we have people in the band promoting both Haken and Helloween alongside Gojira to be the best listening adventure this year. We are definitely spreading our choices and that is probably why NATTAS keeps sounding so rewarding and accessible to so many people. We are different.

Usually, in the past, we have ended interviews with our earlier catch phrase ”Release the Plague”, but nowadays we’re not just into that. Guess why…

We are hoping to meet you all on the road later and hopefully we can say those final words and thoughts together. We need you all just as much as you could possibly need us.