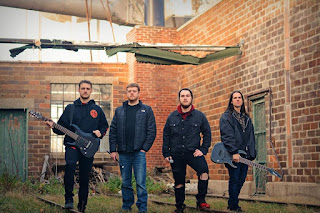 We are from Grand Rapids Michigan and we are a four piece just 2 guitars, vocalist and drums no bass as of yet

2.So far you have released an ep, can you tell us a little bit more about the musical style that you went for on the recording?

We wanted it to be as heavy as possible alot of breakdowns and quick songs they are all around 2:30 minutes

They range from a pack of wolves killing it's pray in alpha to how god has abandoned us in necropolis and Celestial Noose, and in grim our vocalists talks about his abusive stepfather

4.Originally the band was called 'Behold the Wicked', what was the cause of the name change and also the meaning and inspiration behind the name 'GoreThrone'?.

We had a lineup change and when we brought in our vocalists we decided to go more deathcore and needed something that sounded more brutal. The inspiration was just when you hear the name Gorethrone you get the image of just twisted dead bodies and that's what we are going for.

It represent the decent into hell and all the pain and anguish and dispare you would feel when you get there.

6.You got some live shows planned for the summer, what should we expect once you hit the stage?

Our big thing is we put on a show we don't stand there and play we get in your face and even get into the pit with you, we see so many bands just standing there and playing which is cool but we want you to really feel us.

8.On a worldwide level how has the reaction bene to your music by fans of black metal and deathcore?

We are working on a full length right now, we already have four songs written and hoping to get it out by the end of the year. Our new stuff is going to be more technical we are going to have longer songs a few more solos.

The drummer is a huge black metal fan so he is always giving us that and the vocalists is straight deathcore and I listen to alot of djent and progressive metal.

Just be ready for us going for it later this year we are looking to set up our own show Gorefest which we are talking to bands and venues that are interested and be ready for our full length.

Posted by OccultBlackMetal at 9:15 PM