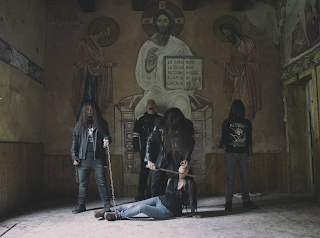 We just continued to compose new stuff in rehearsal room. Creating and releasing new valid music is our main goal, as well as playing live gigs.

Apart from the line-up, the new stuff differs from the old one ‘cause it’s extremely more mature. We enlarged our vision, We’ve found a new language, a new idea to compose extreme metal, mixing different sub-genres and reuniting ‘em under a unique dark atmosphere. We listen many different bands and We use their styles to create “new ways of riffing”. We focus mostly on atmospheres and vibes more than other things, it’s a ‘80s vision. “Reborn in Blasphemy” was a weird form of doom, “Hail to the Necrodoom” is death metal of doom, doom metal of death or simply… NECRODOOM!

After releasing “Reborn in Blasphemy” We made some shows nearby our homeland. Between 2017 and 2019 We were more focused on other projects: Boia, Temptress and Atömlörd. In 2019 We’ve changed line-up and arranged the tracks of “Hail to the Necrodoom”, which We’ve started to record in 02/02/2020.

4.A lot of your lyrics cover horror themes, can you tell us a little bit more about your interest in this topic?

During “Reborn in Blasphemy” ’s period We were more addicted to H.P. Lovecraft’s stuff, so our lyrics were inspired by his novels. This was true for “Lord of the Tentaculars” and “The Whisperer In Darkness”. “The Highlander” was inspired by Sword & Sorcery’s themes, while “Lady Dead” was a classic ‘70s comics’ story about a woman sacrificed on the altar. After our demo We used horror themes as background of real events which happened in our land, Calabria.

5.What are some of the other lyrical topics and subjects the band explores with the new release?

As previously said, the lyrics in “Hail to the Necrodoom” are inspired by the dominant and morbid christian culture here in our homeland, Calabria. We use metaphors from the horror imagery to criticize the context where We live: “Lord of the Fog”, for example, compares christian people in procession with willingless marchant zombies; the story ends with the failure of Christ and his churchgoers. “Where Evil Spawns” comes from our demo-period, It’s inspired by “The Dunwich Horror” by H.P. Lovecraft, the same of “The Whisperer In Darkness”.

This iconic artwork was realized by Negative Crypt Artwork, a Sicilian friend with whom We share the same tastes in music/cinema/nerd art. It represents simply the Necrodoom with a passage to the Other Side from which no one can escape.

Our second Sicilian live show near Catania was our best. We are totally natural and a little bit scenic, for us a live show must be PUNK. We are inspired by early Mayhem!

8.The new album was released on Sun & Moon Records, how would you compare working with this label to your previous label 'Shadow Kingdom Records'?

Shadow Kingdom Records is one of the greatest underground label of the recent years. As Americans they’re very into the business. Sun & Moon Records is less business-addicted and tries to keep its identity, We think.

We are very satisfied of people’s answer. Many said “Hail to the Necrodoom” is/could be the Metal album of the year. We think they’re attracted by the new mix of genres We propose.

Soon Boia will release new stuff in a split album. Temptress will record their debut full-length too. Demonia Mundi have released their first full-length in the early months of 2021.

We’ll mature the style of “Hail to the Necrodoom” for sure, but We can’t describe it now! More black metal maybe?

We keep our focus to underground bands. Nekromantheon’s “Visions of Trimegistos” is the nowadays’ “Reign in Blood”. Hellcrash’ “Crucifix Invertor” and Konquest’s  “The Night Goes On” are new italian gems too. Our friends Bunker 66 released their new full-lenght in Spring. We like to find old and forgotten heavy metal bands too, mostly from Scandinavia.

13.How would you describe your views on Occultism?

An inner path characterized by many different and indescribable personal experiences.

First of all thanks for the interest in us. We are always glad to reply to people’s questions. Fight the christianity and keep the black torch of Metal alive!

Posted by OccultBlackMetal at 6:09 PM