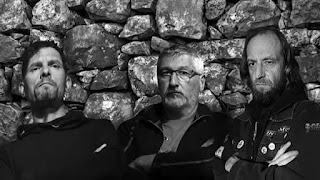 1. Band DeathOmen was founded by vocalist Marjan Macarol in 1988. He was joined by guitarist Miha Gerzej, and in 1989 by bassist Marko Štok and drummer Tomaž Vovk.

2.So far you have released one album, musically how does it differ from your previous demo's?

2. The album Above Holy Ground is our only release. The music sounded youthful and optimistic 30 years ago and at the same time more naive.

3.The band was broken up for 30 years, what was the cause of the split and also the decision to reform?

3. The breakup of the band DeathOmen happened spontaneously, we just didn’t have any more common paths. In 2017, three members felt the need to create together and then it was the  first time that we transformed the band into a project. As a result of that, the album Above Holy Ground was created.

4.Some of the lyrics cover occultism themes, can you tell us a little bit more about your interest in this topic?

4. When you start looking for answers, it is inevitable to face the occult. The only question is how much attention you will pay to it. If you are sincere in your search, you will soon realize that in the conception of existence and life, there is more hidden than revealed.

5. Other themes of the texts refer to society as a whole, and man / individual as its basis. The world is small and the world is big. The man is big and the man is small. Civilization is all we are, and yet it is not much. The apocalypse will be a catastrophe for only a fraction of the universe. All other creations will not even perceive this doom.

6.What is the meaning and inspiration behind the name 'DeathOmen'?

6. The name DeathOmen comes from the time when there was still hope for mankind and it was meant as a warning. Today, however, that is a fact. Today, only the blind and stupid can deny its presence.

7.Can you tell us a little bit about the artwork that is presented on the new album cover?

7. The cover is intended as a simple, simplified presentation of the content of the album, both the introduction and the conclusion. Our letter logo and the actual, pictorial representation of the sign are presented. For easier understanding, it is further clarified that the DeathOmen will rise above the holy land. Of course, over Every holy land

8.Has the band had any opportunities to do any live shows?

8. There is no such possibility.

9.Currently the band is unsigned, are you looking for a label or have received ant interest?

9. No. We are independent artists and do not want to become part of show business. Our work was publicly published on 25.12.2020 and is available on the Bandcamp portal and on our Youtube page.

10.On a worldwide level how has the reaction been to your music by fans of underground metal?

10. Some really listened to the album and began to experience its greatness. One listening is far from enough, it needs to be listened to several times. Research is needed. For most listeners, however, the album simply slipped by.

11. As a human race, we step into the night and let such music accompany us.

12. We listen to many bands and many styles.

13. Beware of the fake clowns!

Posted by OccultBlackMetal at 7:14 PM