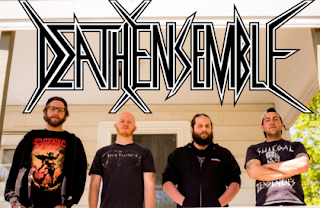 
So I started writing some material after I finished college. It was thrashy like some of my old stuff, but with a little more of a black metal influence. I was just going to do music, no shows or anything. I had been in bands before, and this time I wanted to focus on writing and that’s it. I started going to shows around the Indianapolis scene and immediately wanted to do the live stuff with the new material. I forgot how much fun it was. So I talked to some guys I used to jam with a few years back, and they were all on board.


2.So far you have released a demo, can you tell us a little bit more about the musical style you went for on the recording?


I wanted the musical style on the recording to be a good mix of what represents us. “The Entity Returned” is a straight forward, no frills black thrash track. The beat never really changes, it’s really simple. The guitars in the song have one guy doing the melody, while the other plays the power chords behind it. That’s it. “Gods of Eldritch Horrors” is a little more complex, more parts and guitar harmonies and stuff. The verse is a thrasher, then it’s got a slower creepy Obituary influenced section. Finally “Arrogance Demised” is groovy, kinda Motorhead-y/D-Beat with an old school death metal chug in the middle. When we play that one, I usually see some heads bopping in the crowd.


3.What are some of the lyrical topics and subjects you have explored so far with the music?


A lot of it is about internal struggles and rebellion I guess. Maybe not everyone’s struggles, but things I’ve experienced. And then just like Sci-Fi and Horror stuff that is fun to write about. I say “Entity” is about relapsing, and most people would think of drugs or booze or whatever. I wrote that song from my perspective of being out of the scene for so long that I forgot how much I enjoyed it, so when I started coming out to shows again I was like “Oh shit, this is awesome, why did I stop going to this?” The feeling never left me even though I kind of left it. My wife was watching the Netflix Ted Bundy doc, and Ted referred to the force that took over him as “The Entity”, so that’s how that came to be. That was my relapse. “Gods” is just Lovecraft nonsense, and “Arrogance” is about telling off people who think they’re better than others.


4.What is the meaning and inspiration behind the name 'Death Ensemble'?


Fuckin’ Slayer. The lyrics to one of my favorite songs starts like “Propaganda, Death Ensemble, Burial to be”. I just thought it sounded cool like the name of a firing squad or something.


An Ensemble is a combination of musical parts that complement each other when brought together. So when we as a band come together, we bring nothing short of Death.


5.What are some of the best shows that the band has played so far and also how would you describe your stage performance?


We’ve only played two so far and have two or three more lined up for the rest of the year. Both shows went pretty well, we played our old stomping grounds at North End Pub in Lafayette, and then just played Black Circle Brew Co. in Indianapolis. Lafayette was killer as always. As for Black Circle it was our first time playing there. I’ve never really played Indianapolis much with some of my older bands, so it’s kind of new to me. Everyone in the scene has been incredibly nice, helpful, and willing to lend a hand. I hope we return the favor. So we are really excited to do more there. I would say our stage presence is about high energy and getting the crowd involved. We like to talk to the crowd and interact and stuff.


6. Do you have any touring or show plans for the future?


Perhaps, just depends on who and what is available. Definitely planning on getting more shows in the area and a few in the surrounding states next year sometime. As for the rest of this year, we’re doing two more Indianapolis shows – The Melody Inn on September 21st and State Street Pub on October 19th. Then maybe another Lafayette show to round out the year.


7. Currently you are unsigned, are you looking for a label or have received any interest?


We have reached out to a few labels. It would be nice for the exposure and distribution, but then you lose the element of doing everything yourself and being in 100% control of your art. We’ll see what happens.


8.On a worldwide level how has the reaction been to your music by fans of black and thrash metal?


We have not conquered the worldwide scene, yet. I’ve gotten several emails from Poland and stuff about people wanting to buy the album and put it on compilations and stuff, so that’s pretty cool.


9.What is going on with some of the other bands or musical projects these days that some of the band members are a part of?


Everyone in the band has been part of other groups in the past, but as of right now this seems to be the only active thing for all members.


10.When can we expect a full length and also where do you see the band heading into musically during the future?


Maybe next year or something, at least an EP or something along those lines. I’d like to do some straightforward thrashers in the style of Midnight or Toxic Holocaust or things like that, and then maybe have a longer song or two in there with more sections and stuff. Not getting softer of lowering the BPM, that’s for sure.


11.What are some of the bands or musical styles that have had an influence on your music and also what are you listening to nowadays?


As far as main influences it’s really the big classic bands that drive me still. Venom, the 80’s thrash/90’s crossover stuff, Obituary, Immortal, Bloodbath, etc. Nowadays I do my best to keep up, but a lot of Synthwave/Darkwave stuff, I listen to a lot of New Wave also. Not really the most “metal” I guess! As for newer metal I think Power Trip kicks ass.


12.What are some of your non musical interests? Video Games, Movies, Technology, going to shows. My wife and our cats. Beer.

Posted by OccultBlackMetal at 10:21 PM