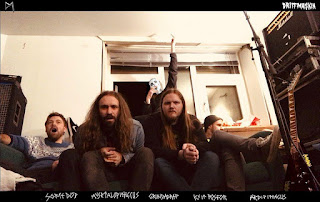 1.For those that have never heard of you before, can you tell us a little bit about the band?
Drittmaskin started as a loose concept that our singer and lyricist Grindadrap fooled around with. He had some lyrics written that was lying around. Our drummer up until recently, Snöfökk, had a studio, and he asked if we should try to get together and see if we could work out something. So me (Avstralopithecvs) Grindadrap and him started practicing, and I started writing melodies for the lyrics. This way of working has been our mode since then. Either a melody from me first, or a finished lyric from Grindadrap. We had some lineup changes, especially on bass, but we landed firmly with Sorte Död who really helped us take things further. His old friend Ardipithecvs came in on guitar, and this really cemented our path. We had to change things around a bit on drums in late 2019, and we now have a great new drummer in Kvit Fosfor.

2.So far you have released one album, can you tell us a little bit more about the musical style you went for on the recording?
I have worked with recording on my own since I was a kid, and have always had a strong connection with a kind of proto-sound, or lo-fi you might call it. Artists such as John Fahey, Moldy Peaches, early Bonnie “Prince” Billy, Darkthrone, David Pajo have all influenced me strongly in how I believe a recording and production process should be.

Musically we are pretty multi-faceted, and we could just as well drop names from weird folk artists or from raw black, death or thrash metal. In our foundation there are certain stand-out metal albums like Scream Bloody Gore (Death) and Transylvanian Hunger (Darkthrone), or the typical early-Bathory sound and song writing, but also There is a Darkness by Bonnie “Prince” Billy or Is this Real by the Wipers.

I guess you could say our sources of inspiration are a bit schizophrenic or manic, but we want to have a straight-forward and raw energy to everything we do. We aren’t trying to make music for sleeping, if you know what I mean. Our mission is to pull out the life’s anger and frustration through a kind of physical music with a lyrical depth that takes no inspiration from the typical metal lyrical landscape.

3.What are some of the lyrical topics and subjects the band has explored so far with the music?
We try to view the lyrical process as a prolongation of our experiences in life. We don’t want to stand on someone else’s shoulders, like most metal bands do. There is a boundary for how many times can you churn out a lyric inspired by HP Lovecraft or Tolkien.

Our lyricist Grindadrap has a strong voice, which is really inspiring to all of us. Almost like a Charles Bukowski, or Michel Houllebecq style, which at least to us reminds us what punk and metal really is: saying the opposite as everyone else, and nurturing your own mind and sense of creative freedom.

In terms of lyrical topics it can range from bashing low brow punks, to ass-fucking derailed and out-of-touch modern elite politicians, describing the dark feeling of wanting to leave everything, or pointing out the certain absurdities we see in our modern day and age.


4.What is the meaning and inspiration behind the name 'Drittmaskin'?
The name to me personally symbolises a sense of total freedom. A machine where you ditch all your shit, and it gets filtered through our collective mind. The concrete meaning of the word could also mean “broken/malfunctioning machine”.

5.Can you tell us a little bit about the artwork that is presented on the album cover?
We wanted to find an artists that embodied our feeling tied to this project. Our antagonism toward a punk and metal world who mostly is terrified of being different. To us, metal and punk is just that: The Will to be different. Wooden Cyclops has a unique visual language that reminds us of some of the shit we grew up loving like the Turtles, He-Man and Conan, and at the same time his style isn’t what you normally see in the world of black thrash or black metal, or even punk. We wanted to work with someone who had this weirdness. An Outsider like us.

6.What are some of the best shows that the band has played so far and also how would you describe your stage performance?
When we rehearse, we act just the same way as we do when we play live. I completely lose it. And this is the entire purpose of doing this. It’s this hole in the ground where you just wrench out every ounce of frustration and pain in life, and for me, when I do this, it turns into this relaxing feeling of euphoria. Almost like having sex. Our singer has a kind of intimidating presence which I also really enjoy. He just gives me the shivers. We’ve had so many crazy experiences live. It seems our Drittfolk just lose it together with us, like some kind of Dark and Unholy Mass. We’ve had people banging their head on the drum kit. Full on fighting. Headbangers. Crazy hippie dancers. We see all kinds of people losing it at our shows.

7.Do you have any touring or show plans for 2020?
Our main goal is to continue our work on our second album, and rather aim for a proper tour in 2021, hopefully down through Europe too. We have a few shows in Norway lined up, but we also want to be able to focus properly on the recording process. So, Europe, just you wait! Fingers crossed for 2021. And if there are drittfolk out there who want us to come to their city, just reach out.

8.Recently 'Edged Circle Productions' re-issued your 2018 album on physical format, can you tell us a little bit more about the newer version?
First off, working with ECP is an extreme pleasure. Their vision and how they lift outsider music is just amazing, combined with all their experience in the business, just makes it even better. The new version is mainly a re-issue since we sold out the first pressing. Also we added some extra details in terms of packaging it with more detail, a poster and stuff like that.

8.On a worldwide level how has the reaction been to your music by fans of black and extreme metal?
It seems our message has hit a lot of people out there, who have the same kind of ideals and that are willing to let their guard down in terms of what to expect from a metal or punk act in 2020. We can’t just sit around and worship old heroes, you know. Plato gave Socrates a cup of poison, even though he was his mentor and great inspirator. People reach out from South and North America, around in Europe, and some strange photos have surfaced from Russian mad-men listening to our songs. To us it feels like getting in touch with lost family members, our own blood.

9.You have a new album coming out later this year, what can we expect musically once it is released?
We are working our asses off with this, and we have planned most of it, and we will work with the same people as on the first release, in terms of mixing and mastering and cover design. We are a bit unsure on how efficient we want to be, but we might round off the production some time this summer. So a release might come late autumn or something like that. Maybe early 2021. We’ll see how fast we can do things, without making any compromises in our vision. Musically we are more violent, more detailed, and we are tighter. The sound will be the same.

10.What are some of the bands or musical styles that have had an influence on your music and also what are you listening to nowadays?
I think I touched in on this in a earlier question?

11.Hat are some of your non musical interests?
All of us have a deep connection with skateboarding and snowboarding, but we also do enjoy our fair share of literature like Carl Sagan, Jack Kerouac, Charles Baudelaire. Grindadrap had a period where he built stuff, constantly, in wood. All kinds of shit. Ardipithecvs enjoys hiking in the mountains, passionate love making, geopolitics and romantic movies. Kvit Fosfor has really dove into the world of brewing beer. Sorte Död is maybe the most practical of us all on his spare time. I think he practically has rebuilt his own house from the ground up. He also does a lot of illustration and graphic design. He kind of laid the whole foundation for our visual style through a huge book he put together where he gathered typography, photos, screenshot from movies, art objects and tons of other shit that really embodies what we want to do in sound. He’s the laid-back guy on stage, but he has great creative mind. He’s our John McVie.

12.Before we wrap up this interview, do you have any final words or thoughts?
Hail the Drittfolk! 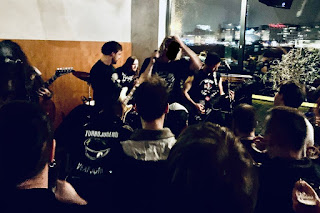 www.facebook.com/drittmaskinband
Posted by OccultBlackMetal at 1:34 AM