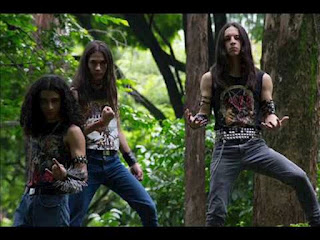 1.For those that have never heard of you before can you tell us a little bit about the band?

H: We are fiends since the high school. Our musical likes clicked since the days we met each other. The band started in september 2014 under the name Infernus. We thought it was not good enough, so we decided to change the name to Hellion. Some people don't like the name, but we don't give a fuck.

After two years of composing songs and play some little shows at local venues, we recorded a demo called "The Rising of Wizards", which was produced and released by Sabbath Productions. A year later the band started to work in the making of the first Full Length, which is called Hordes of Witchery, and was released by the label La Pija Producciones. After two years of rehearsals, shows along the country and work for musical improvement, the band signed with the chinese label Awakening Records,to reissue the existent titles, and release a new album. This last one saw the light in november of 2019, and is called "Rebel's Curse". Currently the band still composing new songs and working to spread the plague to the world of underground Metal.

2.So far you have released a demo, a couple of lengths and have been a part of a split, musically how do they all differ from each other/

H: During the years we have tried to worry to improve our selves musically and artistically. As the years pass we try to be more accurate and professional without losing the focus and devotion for the underground and raw sound. The musical influences and the song writing style haven't changed so much, but we always search to feed the new songs with the knowledge we get through the time.

3.Some of your lyrics cover Satanism and Witchcraft, can you tell us a little bit more about your interest in those topics?

H: The only cult we're loyal to, is the Metal cult. We're not religious for any side, we dont' believe in god or the devil more than we believe in winnie the pooh. Those are fiction characters which have inspired many stories and have given to Rock n' Roll an identity.

We're against the religious doctrines of any kind. But the christianity and all abrahamic religions are the most pure manifestation of the stupidity and not deserved human pride. An invention and excuse to feel special among the rest of the animal reign.

4.What are some of the other lyrical topics and subjects you have explored so far with the music?

The Metal lifestyle, women, rebellion, weed, lust, blasphemy, speed, death, the running of time... there are no bounds.

5.What is the meaning and inspiration behind the name 'Hellion'?

H: We took it from the W.A.S.P's song. There are also some texts that claim that the Hellion is the devil's child. A rebel angel, similar to lucifer. The prince of evil.

6.Can you tell us a little bit more about the artwork on the current album cover?

H: It was made by the art master Wang Jiabin from Awakening Records. He just asked us for some ideas and referents, and started to work... the final result was that awesome piece of art which gives a face to our new album. He also made the artwork for the reissue of "The Rising of Wizards". Pretty insane!

H: Every show we play in, has something special. We enjoy each show as if it was the last.

8.Do you have any touring or show plans for the future?

H: Yes, we have. We are working and dealing to tour and play at the main cities of Colombia in 2020 in order to promote the last production. There are five cities confirmed so far. We have been also planning and working to get out of the national frontiers. Let's see what happens.

H: There are many countries where some maniacs have shown their support and good energy. I don't know if we can call it all worldwide level, but our music has reached lots of places that we never imagined before, and we feel it well received.

H: As i said before, we are always working to upgrade our musical skills and become more professional through the time. We are searching for an authentic sound, without forget our roots and everlasting influences. We'll still speed, we'll still evil, we'll stay thrash.

H: Almost all the 80's Metal bands from heavy to death metal have influenced our music in some way. There are also some bands in the Colombian Scene that we have grow with and developed a huge admiration for. Some new wave of old school bands have inspired our path.

H: There only remains to say thank you, michael for the interest in our work and our history, and for keeping the flame of Worldwide metal always and forever burning!!

Posted by OccultBlackMetal at 2:07 AM